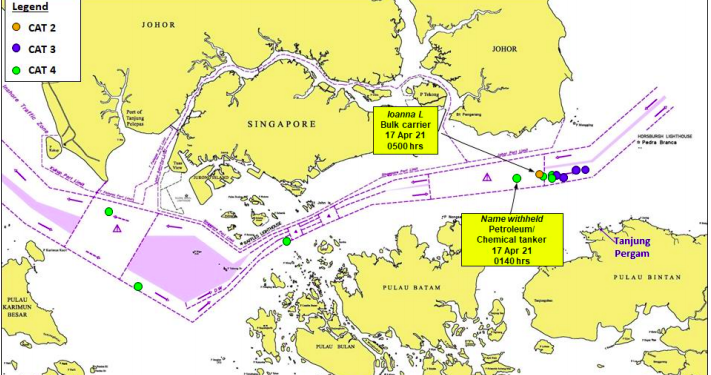 ReCAAP ISC issued another Incident Alert, informing of two incidents against ships while underway off Tanjung Pergam, Bintan Island, Indonesia. The two incidents occurred within an interval of four hours and in close proximity to each other in the eastbound lane of the Traffic Separation Scheme (TSS) in the Singapore Strait.

In one of the incidents on 17 Apr, the duty engineer spotted one perpetrator trying to open the steering gear entrance door from poop deck of a petroleum/chemical tanker. The perpetrator escaped knowing that his presence was discovered. Nothing was stolen.

Within an interval of four hours, another incident occurred onboard a bulk carrier while underway in the same vicinity. Four perpetrators were sighted in the engine room of the ship. One of the perpetrators hit a crew member using an adjustable wrench. The crew sustained a mild contusion on his forehead. Some engine spares were stolen.

See also: 17 armed robberies against ships in Asia mark a 39% decrease in Q1

The latest two incidents bring the total number of incidents against ships in the Singapore Strait January-April 2021 to 12. Of these 12 incidents, nine occurred off Tanjung Pergam (three occurred in January 2021, one in March 2021, and five incidents in April 2021).

Therefore, the ReCAAP ISC urges the littoral States to increase patrols and enforcement in their respective waters, particularly in the waters off Tanjung Pergam; as well as strengthen coordination among the littoral States, including information sharing on the latest situation, and the criminal groups involved, in order to make arrests of the perpetrators.

As the perpetrators of these incidents are not arrested, there is a possibility of further incidents in the Singapore Strait. All ships are advised to exercise enhanced vigilance, adopt extra precautionary measures and report all incidents immediately to the nearest coastal State. Ship masters and crew are advised to keep abreast of the latest situation and tune-in to advisories and navigational broadcasts announced by the littoral States.

Details of the incidents