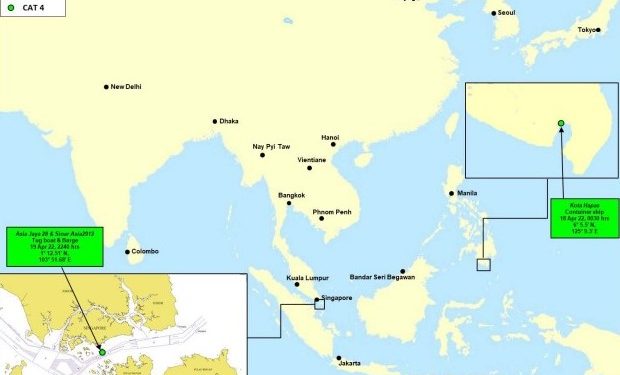 ReCAAP ISC informed that during 19-25 April 22, two incidents of armed robbery against ships in Asia were reported.

Regarding the first incident, on 18 April the OOW (2nd officer) was on roving when he sighted two perpetrators attempting to board the ship near the portside gangway. The perpetrators jumped into the water when realized that they had been spotted. At 0305 hrs on the same day, the duty AB on deck patrol sighted one perpetrator near the portside gangway of the ship. He immediately informed the 2nd officer who saw the perpetrator jumping into the water from the aft station area of the ship. The master and crew conducted a search in the engine room, accommodation and main deck; and found that the padlocks of the fire station locker and chemical locker were broken. However, nothing was stolen and the crew was not injured.

On the second incident, on 19 April the master of the tug boat reported to Singapore Vessel Traffic Information System (VTIS) that two perpetrators were sighted escaping from the barge on tow. The Singapore Police Coast Guard intercepted the ships and arrested the remaining eight perpetrators on board the barge. The crew was safe during the incident. With this incident, a total of 20 incidents (comprising 19 actual incidents and one attempted incident) were reported in the Singapore Strait since January 2022.

However, ReCAAP ISC reiterates its advisory issued via ReCAAP ISC Incident Alert dated 21 November 16 to all ships to reroute from the area, where possible. Otherwise, ship masters and crew are strongly urged to exercise extra vigilance while transiting the area, and report all incidents immediately to the Operation Centres of the Philippines and Eastern Sabah Security Command (ESSCOM) of Malaysia.