In its weekly report for 19-25 May, ReCAAP ISC informed of two incidents of armed robbery against ship in Asia. Both were CAT 4, which means least significant incidents. The incidents occurred onboard a tanker while berthed at Belawan Port, Indonesia and on a bulk carrier while anchored at Campha Anchorage, Vietnam.

The first incident involved the Liberian-flagged bulk carrier Baltic Cove, Campha Anchorage, Vietnam, in the early morning hours of 22 May.

While at anchor, the duty A/B found some hose nozzles in a drum near the paint store and reported to the duty officer and chief officer.

A check was conducted around the stores and a hoisting wire was found missing from the bosun store. The incident was reported to the local agent.

The second involves the Singaporean-flagged petroleum tanker MTM Penang, while berthed at Terminal Ujung Baru 107, Belawan Port, Indonesia, in the early morning hours of 16 May.

While at berth, some stores items from the ship deck and accommodation were reported stolen.

Upon investigation, it was assessed that the incident occurred during sampling procedure when all deck watch crew were involved at work.

The stolen items could have been removed from the ship starboard side into some waiting boats or were taken by those who present on board the ship.

The incident was reported to the local authority. The crew was not injured. 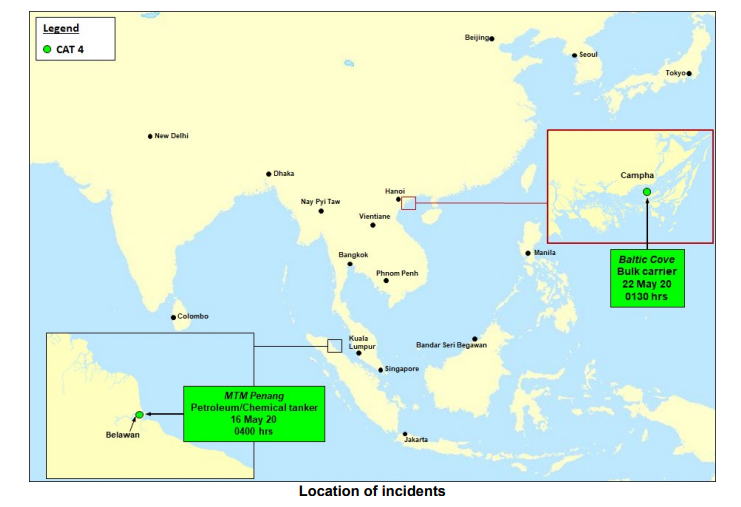 On 22 May, the ReCAAP ISC received information from the Philippine Coast Guard (ReCAAP Focal Point) that a group of approximately five Abu Sayyaf Group (ASG) members armed with assorted firearms was planning to conduct kidnapping activities in undisclosed areas in Sabah, Malaysia.

The ReCAAP ISC advises the shipping industry and ships to enhance their situation awareness by referring to the Guidance on Abduction of Crew in the Sulu-Celebes Seas and Waters off Eastern Sabah by ReCAAP ISC in July 2019.