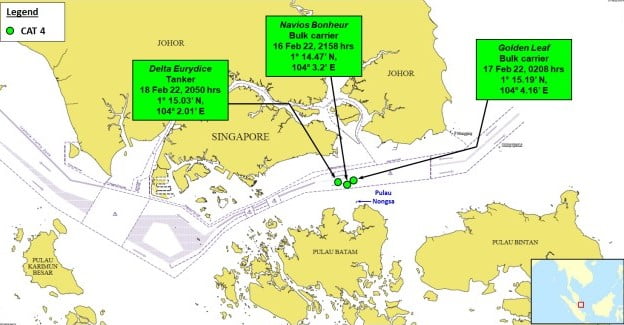 ReCAAP informed that during 15-21 February 22, three CAT 41 incidents of armed robbery against ships in Asia were reported.

All three incidents occurred to ships while underway in the eastbound lane of the Traffic Separation Scheme (TSS) in the Singapore Strait (SS). The crew was safe and nothing was stolen in all three incidents.

During 15-21 Feb 22, one incident outside Asia was reported to the ReCAAP ISC. The incident occurred to a container ship while anchored at pilot boarding area of Port Lafito, Haiti. The detailed description of the incident is tabulated in the attachment.

The Philippine and Malaysian authorities continued to conduct pursuit operations and intensify military operations to neutralise the ASG. In 2021, the operations carried out by the Armed Forces of the Philippines had resulted in the neutralisation of some ASG subleaders and members. However, as Mundi Sawadjaan (one of the ASG Commanders responsible for the abduction of crew in the Sulu area) is still at large, the threat of abduction of crew from ships remains high, particularly in the areas of Sulu and nearby waters off Tawi-Tawi.

For this reason, ReCAAP ISC recommends ships to reroute from the area, where possible. Otherwise, ship masters and crew are strongly urged to exercise extra vigilance while transiting the area, and report all incidents immediately to the Operation Centres of the Philippines and Eastern Sabah Security Command (ESSCOM) of Malaysia.