In its weekly report for 28 May- 3 June, ReCAAP ISC reported two Category 4 incidents of armed robbery and one attempted piracy incident against ships in Asia. Notably, there have been six incidents in close proximity to each other in the western sector of the Singapore Strait since February.

The first Category 4 incident occurred on 29 May in Cigading port in Indonesia involving the Singaporean-flagged bulk carrier 'CSK Enterprise'.

The duty oiler discovered two unauthorised persons in the steering room during his safety patrol. The alarm was raised and the persons fled with some spare engine parts. The crew was not injured.

The second Category 4 incident occurred on 30 May in the Singapore Strait involving the Malaysian-flagged tug boat 'Asia Jaya 28' and the towing barge 'Sinar Jaya 2912'.

The ships were underway at approximately 3.4 nm southeast off Tanjung Piai, Malaysia in the westbound lane of the Traffic Separation Scheme (TSS) of the Singapore Strait, when an unknown number of perpetrators boarded the barge.

The perpetrators stole some tools from the barge and escaped in a small craft.

This is the 6th incident that occurred in close proximity to each other in the western sector of the Singapore Strait during the period of February to May 2019. All six incidents occurred to tug boats towing barges while underway in the westbound lane of the Traffic Separation Scheme (TSS),

With respect to a recent surge in incidents in the region, ReCAAP ISC issued an alert in April, recommending all ships, particularly tug boats to exercise enhanced vigilance and adopt extra precautionary measures. 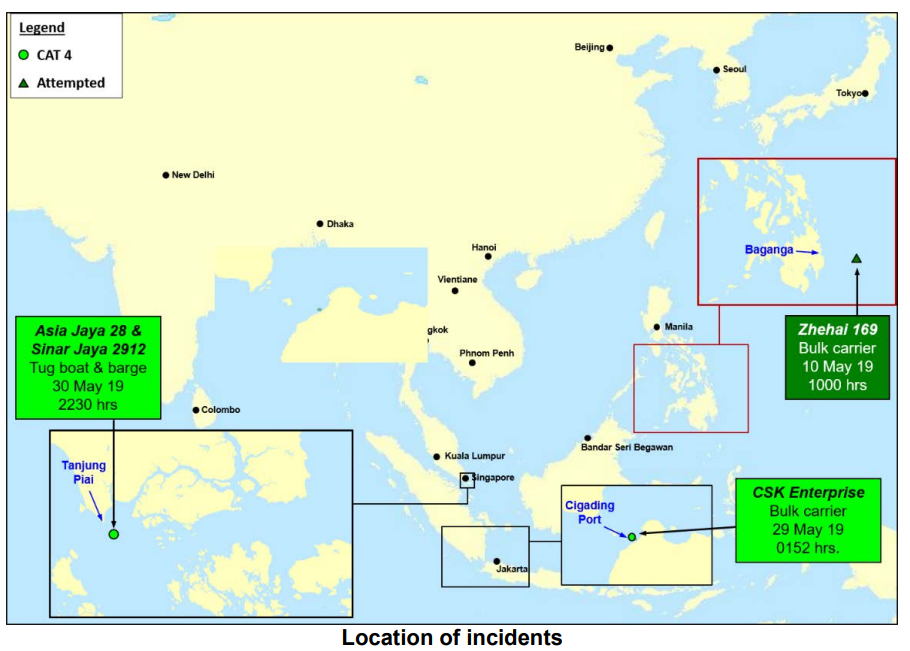 The attempted incident occurred on 10 May at approximately 120 nm east of Banganga, Philippines. This is the first time an incident in that area was reported to ReCAAP ISC.

The incident involved 10 perpetrators who attempted to board the Chinese bulk carrier 'Zhehai 169', but failed due to the piracy countermeasures adopted by the crew.