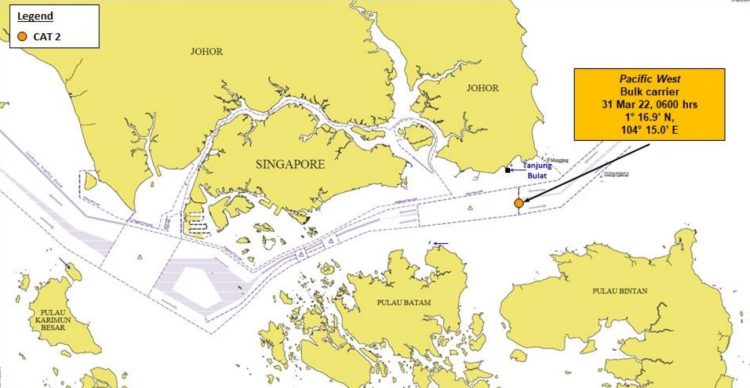 During 5 – 11 Apr 22, one CAT 21 incident of armed robbery against ships in Asia was reported to the ReCAAP ISC.

The incident occurred on 31 Mar on board a bulk carrier while underway in the eastbound lane of the Traffic Separation Scheme in the Singapore Strait. This incident was only reported to the ReCAAP ISC by ReCAAP Focal Point (Singapore) after confirmation with the shipping company.

In the incident, about six or seven perpetrators armed with knives boarded the ship, threatened the duty motorman and tied him in the engine room. The crew managed to free himself and report the incident to the Chief Engineer. The ship alarm was raised and crew mustered. A search on board the ship was conducted, with no further sighting of the perpetrators.

Some auxillary engine and main engine spare parts were stolen. All crew was safe and accounted for. The location of the incident is shown in the map below, and detailed description is tabulated in the attachment. With this incident, a total of 18 incidents were reported in the Singapore Strait since January 2022 so far.

There is no incident of abduction of crew reported since the last incident in January 2020 up to today, and no crew is currently being held in captivity by the Abu Sayyaf Group (ASG). On 23 Apr 21, the Philippine Armed Forces conducted a military operation against members of the ASG during which one of the ASG leaders responsible for the abduction of crew in the area of Sulu and Tawi-Tawi had managed to escape.  The threat of the abduction of crew in the Sulu-Celebes Seas and waters off Eastern Sabah remains potentially high particularly in the areas of Sulu and nearby waters off Tawi-Tawi.

The ReCAAP ISC reiterates its advisory issued via ReCAAP ISC Incident Alert dated 21 Nov 16 to all ships to reroute from the area, where possible. Otherwise, ship masters and crew are strongly urged to exercise extra vigilance while transiting the area, and report all incidents immediately to the Operation Centres of the Philippines and Eastern Sabah Security Command (ESSCOM) of Malaysia. The contact details of the Operation Centres of the Philippines and ESSCOM of Malaysia.