In its weekly report for 14-20 January, ReCAAP ISC informed of four incidents against ships in Asia, comprising a very serious incident (CAT 1) and three least serious (CAT 4) incidents. The highlight of the week was the first crew abduction in 2020 from a fishing vessel off Malaysia on 17 January.

The two other incidents occurred on 18 January within an interval of five hours to the same barge towed by a tug boat while underway in the eastbound lane of the Traffic Separation Scheme (TSS) in the Singapore Strait.

The other CAT 4 incident occurred last year, on 23 December, to a ship while anchored at Manila International Container Terminal (MICT), Philippines.

With the inclusion of this incident, the total number of incidents in 2019 is 83.

The fishing trawler was later found abandoned and with no crew onboard on 17 January 2020 at about 1500 hrs at approximately 4.24 nm off Pulau Tambisan, Lahad Datu, Sabah, Malaysia.

On 18 January 2020, the Malaysian authorities recovered three of the eight missing crew in the vicinity of Lahad Datu, Sabah.

The Philippine authorities were conducting maritime patrols in the area, particularly near the Sulare island (which was believed to be the staging area of the perpetrators).

The Philippine and Malaysia authorities are stepping up their patrol efforts, conducting pursuit operations and intensifying its military operation to locate the five abducted Indonesian crew.

This involves the Singaporean-flagged tug boat Kim Hock Tug 9 towing the barge LKH 2882, in the morning hours of 18 January.

While underway, six to seven perpetrators were sighted onboard the barge. The perpetrators escaped in two to three sampans upon seeing another tug boat, Kim Hock Virgo approaching them.

The master of Kim Hock Tug 9 reported the incident to Singapore Vessel Traffic Information System (VTIS). The crew was not injured. Some scrap metal was stolen.

The perpetrators fled in their sampans upon seeing the PCG craft. The crew was not injured. Several pieces of scrap metal were stolen.

This involves the Liberian-flagged container ship 'MV Kwonloon Bay', in the afternoon hours of 23 December.

While at anchor, an unknown number of perpetrators boarded the ship through the hawse pipe and broke the padlock of the forecastle store.

They stole three pieces of the cleaning apparatus for storage area and one compressed air breathing apparatus.

The crew only realised the theft incident when he was cleaning the tank.

The incident was reported to the Coast Guard Station Manila whose personnel boarded the ship to conduct inquiry and investigate. The crew was safe. 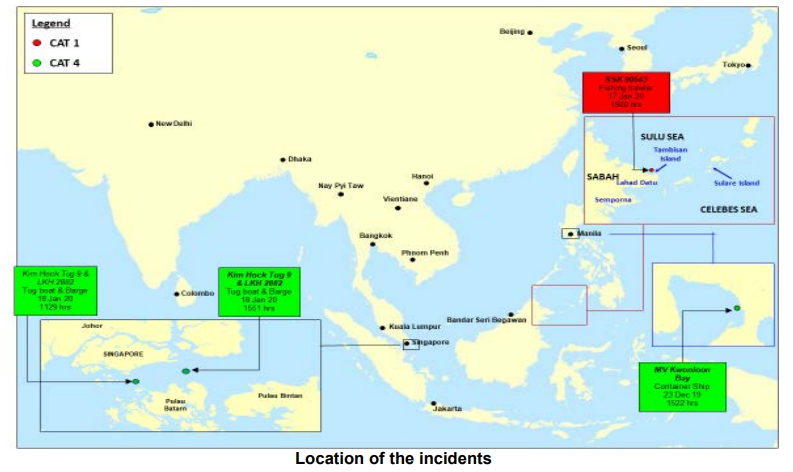