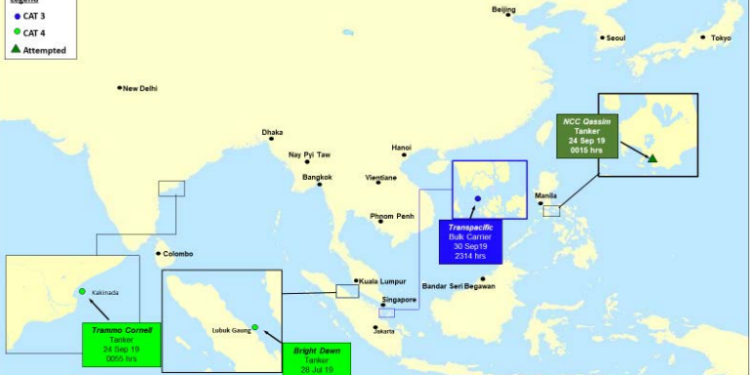 In its weekly report for 24-30 September, ReCAAP ISC informed of a total of four incidents of armed robbery against ships in Asia. From these incidents, one occurred in Indian anchorage, one in a Philippine anchorage and two in Indonesia.

The first incident involved the Maltese-flagged bulk carrier ‘Transpacific’. While underway off Pulau Cula, Indonesia in the eastbound lane of the Traffic Separation Scheme (TSS) of the Singapore Strait, five perpetrators armed with knives were sighted on the ship deck. The alarm was raised and the crew searched the accommodation area but the perpetrators already escaped. The master reported the incident to Singapore Vessel Traffic Information System (VTIS). The crew was safe and nothing was stolen.

The second incident involved the Singaporean-flagged tanker ‘Trammo Cornell’. While at anchor at Kakinada Anchorage, India, two perpetrators boarded the ship through the forecastle area from a dinghy boat and stole two mooring ropes, each of 220 meter long. The emergency alarm was raised and the perpetrators jumped overboard and escaped in the dinghy boat. The master reported the incident to Kakinada Port. The crew was not injured.

The fourth incident involved the Saudi Arabian-flagged tanker ‘MT NCC Qassim’. While at anchor at Mabini Anchorage, Batangas, Philippines, a perpetrator from a small watercraft climbed the anchor chain and attempted to board the ship through the hawse pipe.

The report includes another incident outside Asia, involving the Singaporean-flagged tanker ‘Grace Victoria’. While at anchor at Secured Anchorage Area, Lagos, Nigeria, the duty watchmen raised the alarm when he found two unauthorized persons onboard the ship. The perpetrators jumped overboard upon hearing the alarm. The nearby patrol boat NSS Fortress was alerted via VHF. No injury was reported and no property was stolen.

The improvement of the situation during January-August 2019 can be attributed to the decrease in the number of incidents in Bangladesh, Indonesia and Malaysia.