by The Editorial Team
in Alerts, Fines 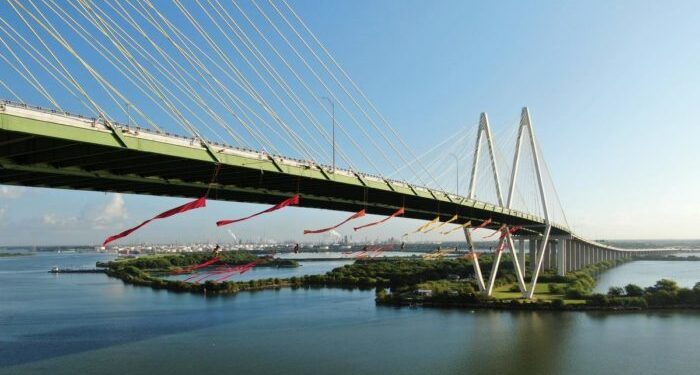 Twenty-two Greenpeace USA climbers form a blockade on the Fred Hartman Bridge in Baytown, Texas shutting down the largest fossil fuel thoroughfare in the United States ahead of the third Democratic primary debate in nearby Houston / Credit: Greenpeace

US authorities criminally charged climate change protesters for shutting down the largest US energy-export port for a day by dangling from a bridge. The protest organized by Greenpeace closed part of the Houston Ship Channel on Thursday.

The Harris County District Attorney’s office said its charges were the first under a new law that makes it a felony to disrupt energy pipelines and ports, Reuters reported.

Those charged include 31 people who dangled on ropes off a bridge, costing many millions of dollars in lost commerce, said Sean Teare, a Harris County prosecutor.

Most of the protesters were expected to appear Friday before a magistrate for a probable cause hearing, he said.

All 31 face up to a $10,000 fine and two years in prison if convicted. The district attorney’s office plans to convene a grand jury to consider other criminal charges, he said.

Federal prosecutors separately charged 22 members of the same group with misdemeanor obstruction of navigable waters, according to a filing on Friday. They could face up to a year in prison on the federal charges.

This is a bullying tactic that serves the interests of corporations at the expense of people exercising their right to free speech,

The Houston Ship Channel on Friday reopened for vessel traffic after the last of 11 protesters was removed by police.

The Houston Ship Channel stretches 53 miles (85 km) from its entrance in the Gulf of Mexico to the Port of Houston.

The area affected is home to five major oil refineries, as well as chemical and oil-export terminals.