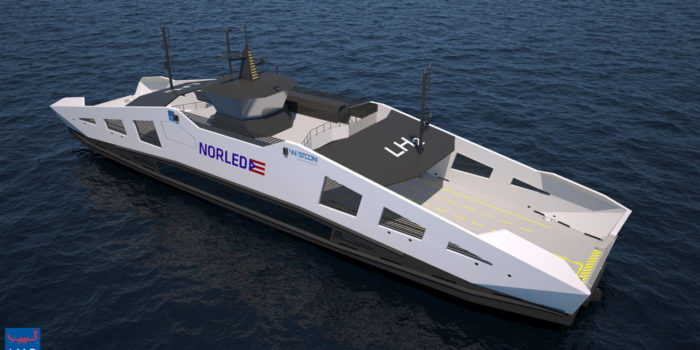 Progress made for the construction of world’s first hydrogen ferry

Ferry company Norled and the shipyard Westcon have signed a contract for the construction of two new ferries. One of them will be the world's first car ferry that sails on hydrogen and the other will be a battery-powered ferry.

The ferries will have a capacity of 299 passengers and 80 cars, and they will operate the national road 13 ferry connection Hjelmeland - Skipavik - Nesvik in the Ryfylket from spring 2021.

Norled said that hydrogen as a zero-emission fuel is better suited to supply larger amounts of energy to the ferry propulsion systems. This feature can be used to increase sailing distance or speed.

Sigvald Breivik, Norled's Technical Director believes that this  project will contribute to the Norwegian maritime sector, making it a leader in hydrogen-fueled ferries.

Since we signed the contract with the Norwegian Public Roads Administration in January to build and operate a completely new type of zero-emission holiday based on using hydrogen as fuel, the interest and intake has been great from both home and abroad

The new hydrogen project is one of the largest that both Westcon and Norled have had. However, back in 2015, Norled launched the world's first battery-powered car and passenger ferry, MF Ampere, which is considered an icon of the green revolution of the ferry industry.

What is more, in 2022, more than 70 Norwegian ferries will be running on battery, contributing greatly to climate and environmental emissions. The companies now aspire to make the hydrogen ferry a new milestone, putting Norway on the map as far as zero maritime emission technologies are concerned.

The project also wants to showcase that hydrogen can be used on energy-intensive connections where battery technology alone cannot.

The two ferries are expected to be ready in March and May 2021.