by The Editorial Team
in Loss Prevention, Safety 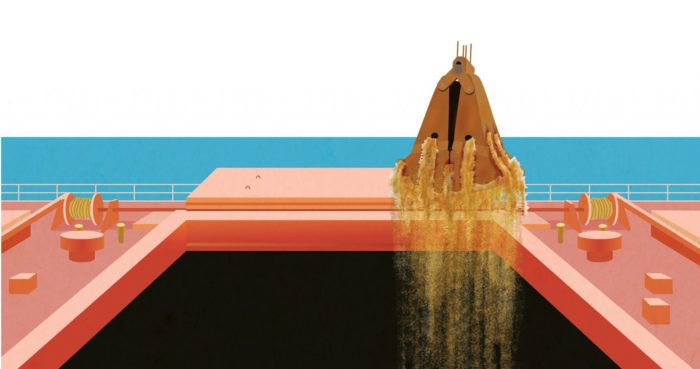 As the American Club says, Pandiman Philippines Inc., the Club’s correspondents in Manila, provided the following reminder regarding the hazards associated with the carriage of nickel ore, as the seasonal export of this dangerous cargo from the Philippines gets underway.

The hazards risen by the carriage of nickel ore cargoes due to their propensity to liquefy cannot be over-stressed. As the American Club says, about a hundred lives have been lost during the last ten years, including nine ships in incidents of nickel ore liquefaction.

For this reason, strict compliance to good industry practice in the analysis, monitoring and loading of cargoes of nickel ore, according to the International Maritime Solid Bulk Cargoes Code (IMSBC Code), is very important to ensure safety.

Namely, Pandiman’s surveyors have attended over 4,000 vessels loading nickel ore there. The cargoes are normally loaded in Surigao between June and November. In 2018, Pandiman organized surveyors’ attendance at more than 200 vessels in the Philippines, which amount to around 11 million tonnes of nickel ore being loaded. However, there are many vessels that load nickel ore without the help and attendance of a surveyor.

During 2018, Pandiman also took place in rendering assistance to the owners and insurers of two vessel. One had loaded nickel ore in Indonesia, and then had to seek refuge within the Philippines to deal with stability issues because of the cargo having liquefied. Another had loaded in the Philippines and also had liquefaction problems.

Clearly documented concerns still remain as to the accuracy of the loading certificates being provided by the local mines ‘in-house’ laboratories. These worries are based on the results of comparison analysis of samples taken by independent laboratories.

The results have shown disparities of up to 10% in moisture content, while experts believe that the analysis protocol that is conducted locally for the determination of the moisture content and Flow Moisture Point (FMP) does not comply with the IMSBC Code.

The ore is unprocessed and is gained from open cast mining and is exposed to the elements, especially rain during monsoon seasons. Recently, because of climate change, the clear demarcation between dry and wet seasons has decreased, and rain can be experienced any time of the year in Surigao, Mindanao.

Having a surveyor attend on board

Due to the remote locations of the loading areas, it can be challenging to get surveyors to the load port fast when a master of a ship has raised a concern. Additionally, shippers are often reluctant to suspend loading.

As a result, it is best to have a local surveyor in place at the load port to inspect any available stockpiles before loading starts and then monitor the loading on board the vessel. Moreover, according to Pandiman, the demand for this cargo is as high as ever.

The human eye cannot detect whether a cargo complies with the IMSBC Code and is safe for carriage. This can only be achieved in a reputable laboratory in controlled tests. What can be done is to recognize when the condition of the cargo being loaded should be questioned

Furthermore, the most familiar method to many will be the ‘can test’ as described in the IMSBC Code. Nevertheless, one needs to also know that IMSBC Code states that in case samples remain dry after a ‘can test’, the moisture content of the material may still be over the Transportable Moisture Limit.

Masters and crew who are loading the cargo musto be able to recognize when a cargo of nickel ore should cause concern and, thus, requires a full analysis in a laboratory. The following are clear warning signs: 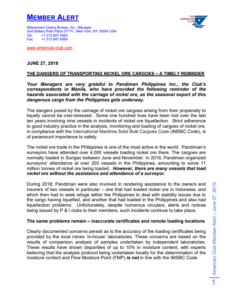