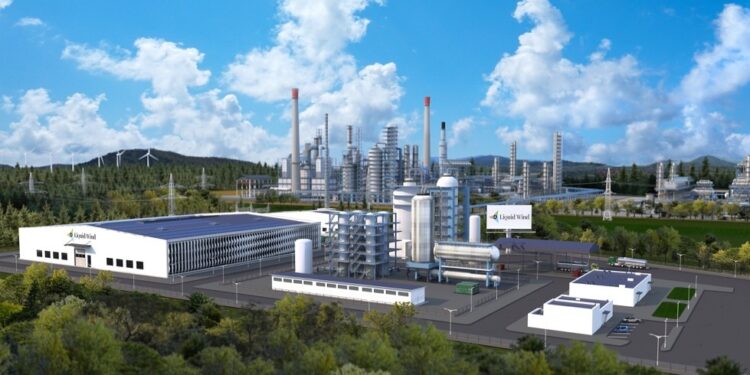 As such, the consortium, consisting of Axpo, COWI, Carbon Clean Solutions, Haldor Topsoe, Nel Hydrogen and Siemens, will combine their expertise and technology to establish commercial-scale renewable fuel facilities.

The project is supported by a 1.7M Euro investment from EIT InnoEnergy, meeting growing demand for renewable fuels to enable more sustainable transportation.

Under the collaboration, each facility of the Consortium will capture waste carbon dioxide (CCU) and combine this with hydrogen, made from renewable electricity and water, to produce renewable methanol, eMethanol, which is carbon neutral and easy to store, transport and use.

The process of upcycling waste carbon dioxide for use as a renewable fuel to replace fossil fuels, will prevent the emission of new carbon dioxide.

The fuel provides an ideal solution to reduce carbon emissions in Marine and Road Transport, which are currently lacking viable, low-carbon fuel options at scale.

Currently, Liquid Wind are in discussions with shipping companies for purchase agreements on the carbon neutral fuel later this year.

Industries and governments are making commitments to reduce their carbon emissions and operate in a more sustainable manner. To actually achieve this, we need to ensure that we have the necessary resources and infrastructure in place,

The consortium is now designing  the technology integration for the first facility in Sweden and expects to be supplying eMethanol from 2023.

The long-term collaboration will result in a standardised eMethanol facility blueprint, captured as a ‘digital twin’, for efficient replication.

For the time being, the consortium intends to develop 6 facilities across Scandinavia by 2030, the concept will then be scaled and licensed internationally.