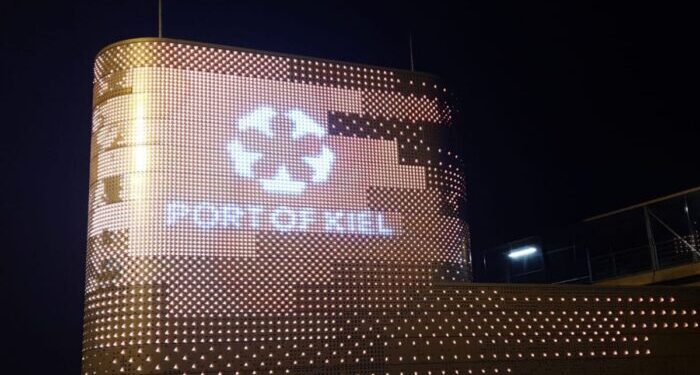 Kiel’s mayor Dr. Ulf Kämpfer inaugurated the new façade of the shore power facility, which was co-funded by the state government of Schleswig-Holstein (8,9 m Euro) and the EU (1,26 m Euro).

In addition, Germany´s federal government recently agreed on a political package to decrease the user prices for on-shore electricity significantly.

We are very grateful for the political support on various levels. The planned decrease of user prices for shore side electricity is an important step for the competitiveness of environmentally- and climate-friendly technologies in Northern Europe. At the same time, we are very happy about the continuous positive dialogue with our partners at Port of Kiel and the city of Kiel

Commenting on the new facility, Dr Ulf Kämpfer, said that climate protection is one of Kiel’s priority goals. What is more,  the Port of Kiel made a major contribution to the realisation of its climate protection strategy: the 100 % Climate Protection Masterplan.

The onshore power supply plant is also an important milestone for the port, which aims to become the most ecological port in Europe. Namely, the plant ranks among the most powerful ones of its kind and will supply the ferries of the Stena Line shipping company with eco-power in a first step. From next year onwards, two vessels can take eco-power at once, i.e. a cruise ship and a ferry.

As from January, we will cover 44% of the energy demand by the vessels berthing in the port of Kiel in an emission-free and climate-neutral way. In two years, it is supposed to be 60 to 70 %. Through this, Kiel takes a leading role