The Port of Hamburg handled 7 million TEUs on container services since the begging of the year, marking a 6.9% increase in its volume. As the German port announced, a big part of its growth was down to the four new transatlantic services and four new Baltic feeder services.

Specifically, from January until September 2019, Port of Hamburg managed 439,000 TEU on container services with one of the most significant trading partners for the port, the USA. In comparison with the same period last year, the port handled 336,000 TEU more, counting an advance of 325%. 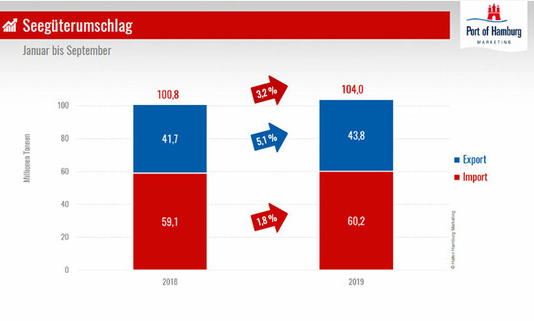 For the time being, Hapag-Lloyd and Ocean Network Express (ONE) are operating the new transatlantic services while offer Hamburg a strong connection with ports in the USA, Canda and Mexico.

Including the existing liner services, in Hamburg, we can offer port customers a total of 14 direct links with 29 ports in the USA, Mexico and Canada. An additional 15 feeder and liner services in the first nine months provide a clear indication that the Port of Hamburg is now even more attractive for shipping and shippers.

...said the Joint CEO of Port of Hamburg, Ingo Egloff.

An intense number of feeder connection with Baltic and other regions Europe give to the port "an essential function" of a cargo hub. Also according to the port, these services are keeping sure that "attractive volumes" of cargo are managed from the mega-ships which connect Hamburg with all the leading ports of the world.

At 2.6 million TEU for the first nine months, the 4.3 percent advance in transshipment handling during the first three quarters contributed to the satisfactory total result.

For the records, the reports showed an increase from mega-containerships- with slot capacities over than 18,000 TEU -  from 18,3% to 124%. At the same time a further growth of 3.2% was seen in the seaborne cargo throughput, marking 104 million tons in the first nine months of 2019.

On the other hand a small decrease of 2.1% in bulk cargo was noted, as 31.6 million tons were handled in the first three quarters of this year.

Moreover, a 5.2%  increase in freight transported into/out of the port by rail, marked a 36.6 million tons of freight in total. As for the container transport segment, 11.9% growth was noticed, as 2.1 million TEU were managed by rail in the Port of Hamburg.

Speaking of the context of the climate policy debate, the Port's CEO noted that those liner services, such as electric traction and railborne freight traffic, can provide 100% emissions-free transport aiding to the port's project reduction of CO2.

More than 100 liner services, connecting Hamburg with over 1,000 seaports worldwide, deliver the containers that via Hamburg are then distributed inland. These services also contribute toward the port’s added value. They also guarantee the numerous jobs required to manage these complex transport logistics.