The Massachusetts Port Authority (Massport) presented a new report, showing that the Port of Boston contributed $8.2 billion in economic activity in 2018, an increase from $4.6 billion in 2012. Smart investments and partnerships were the drivers to increasing jobs, business revenues, and tax contributions.

Businesses along the Commonwealth and New England depend on Boston’s Port to import and export their products. The Economic Impact Study shows that jobs related to Port activities grew 32% to 66,000 between 2012 and 2018.

These jobs represent the people who work in the cargo industry, seafood processing operations, the harbor sightseeing tours, and the cruise industry. The number of direct jobs has also risen about 30% during the same period, from about 7,000 to over 9,000. These employees worked in Massport owned and operated facilities, as well as private terminals and facilities throughout the Port.

This report shows that the Port of Boston doesn’t just help to fuel growth in other businesses throughout Massachusetts, it is an engine of economic activity unto itself. By continuing to invest and support this critical economic asset we are helping to ensure the current and future success of the economy in Massachusetts

Since 2012, there have been numerous major projects to enhance or renovate various areas of the Port. Namely, in 2017, Massport took the trucks off the neighborhood streets by building the Thomas J. Butler Freight Corridor, a $75 million dedicated roadway for container trucks entering and leaving Conley Container Terminal.

Another major infrastructure project launched in the last several years is the Boston Harbor Dredging Project. The maintenance dredging of the inner harbor was completed in December 2017 and the deepening of the main ship channels will be finalized by the end of 2021. The $350 million project is around 40% complete and will enable the Port to welcome large container ships, and remain competitive with larger ports along the East Coast.

Massport and the Commonwealth are also spending $210 million to establish a new 50-foot deep berth and procure three new ship-to-shore cranes to better serve the larger container ships that are calling the Port and the even larger vessels that will call in the future. This project is expected to be completed by the end of 2020. Massport also plans to expand the Flynn Cruiseport Boston to add a second homeport facility and terminal upgrades to serve larger cruise ships carrying more passengers.

You may see more details in the PDF herebelow 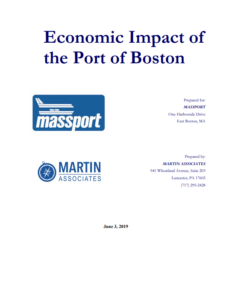