Despite the COVID-19 lockdown and the severe damage that has brought within the shipping industry, Port of Antwerp marked a 4% increase in its total freight volume in comparison with the same period last year. The second largest port in Europe, informed that the coronavirus impacts still remaining limited.

Port of Antwerp remains 100% operational despite the far-reaching social consequences of the corona pandemic. Freight handling and industrial production are continuing unabated, thanks to the efforts of the entire port community of employees and employers.

Port of Antwerp noted that container volume increased by 9.5% in TEU and 9.4% in tonnage, making the container trade by far the largest segment in the port.

At the same time, there was a noticeable growth in the amount of pharmaceuticals and e-commerce products while there was higher demand for long-life foodstuffs.

Although breakbulk volume declined by 27.8%, with imports being hit harder compared to exports. Specifically, volume of iron and steel, the most important category in this segment, continued its negative trend with a contraction of 36.8%. 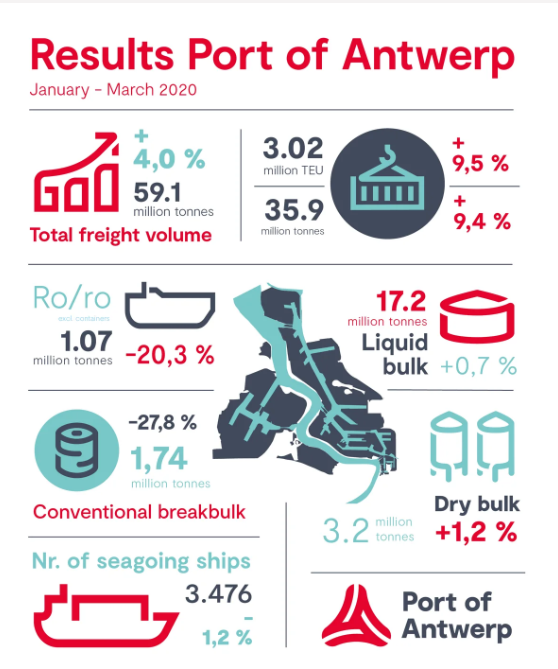 Following the lockdown in the car trade and the reduced steel imports, an 18% drop in the number of new cars was also seen. The total ro/ro volume was down by 20.3%.

As for the dry bulk volume, at the end of the first quarter was slightly up, by 1.2%. Moreover, the liquid bulk for its part held steady, only slightly down by 0.7% due mainly to slower economic growth and fluctuating oil prices.

The volume of chemicals experienced growth of 4%. Oil derivatives for their part were up by 1.3% while crude oil by contrast was down by 13.5% at the end of March.

The impact of the crisis during the first quarter has remained fairly limited, but it will become apparent in the second quarter with cancelled departures, large sectors of industry such as the car industry in western Europe being shut down, and changing patterns of consumer behaviour.