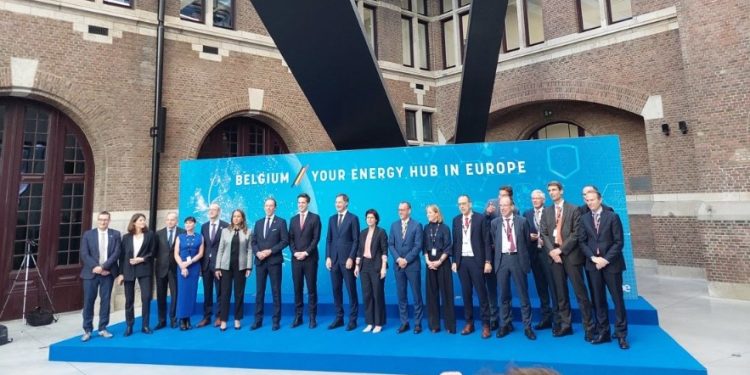 Belgium’s Prime Minister Alexander De Croo proposed a revision of the country’s federal hydrogen strategy during a visit to the Port of Antwerp-Bruges.

The planned modification, which includes the establishment of a federal hydrogen council, aligns with the government’s broader energy objective of achieving the European goal of climate neutrality.

Port of Antwerp-Bruges’ strategy and projects for the importation, production and throughput of green hydrogen makes it an essential player in Belgium’s ambition to become European’s hydrogen hub.

The federal hydrogen strategy was approved late last year and is part of the transition to 100% renewable energy and climate neutrality. Hydrogen plays an important role in this transition and is a necessary link in a future sustainable and robust energy system.

To become carbon neutral, Belgium not only needs renewable electricity but also large quantities of renewable hydrogen, which is produced locally but will mainly have to be imported in large quantities. One of the goals of the strategy is to position Belgium as an import and transit hub in Europe for green hydrogen.

Prime Minister Alexander De Croo, Minister of Energy, Tinne Van der Straeten, and State Secretary for Economic Recovery, Thomas Dermine, explained this revision of the federal hydrogen strategy in the presence of stakeholders from various sectors including chemistry, industry and energy at the Port of Antwerp-Bruges Port House.

From 2026 onwards, the port of Antwerp-Bruges will see its existing capacity further expanded to receive the first green hydrogen molecules on its platform. To strengthen its position, Port of Antwerp-Bruges formed the hydrogen import coalition together with five major industrial players and public stakeholders: DEME, Engie, Exmar, Fluxys and WaterstofNet.

Collaborations with several exporting regions have also been established in order to kick-start this hydrogen chain. Several Belgian companies are currently developing hydrogen export projects around the world.

In addition, the port is working to expand terminal capacity for existing and new hydrogen carriers at both port sites, while the government is funding a network of hydrogen pipelines that will connect ports to Belgian industrial areas and Germany by 2028.

There will also be local production at the Zeebrugge and Antwerp port platforms. Zeebrugge is the ideal location for the construction of a plant for the production of green hydrogen due to the presence of wind farms and natural gas infrastructure.

Fluxys and Eoly are responsible for the construction of this plant under the name HyoffWind.