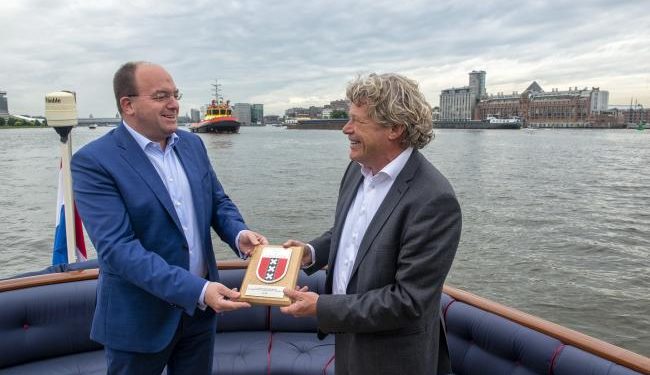 Port of Amsterdam and duisport will expand their long-lasting cooperation, as they will jointly develop the hydrogen value chain and their hinterland network.

Port of Amsterdam and duisport will jointly explore the potential of several hydrogen carrier technologies, with the aim of establishing an international supply chain for hydrogen on a commercial scale.

The import, storage and distribution of green hydrogen carriers play an instrumental role in enabling the energy transition in the industrial and maritime sectors.

Both ports recognize the great value of joining forces in developing new corridors for sustainable energy carriers, with the aim of decarbonization of international supply chains

In addition to the development of the green hydrogen value chain, duisport and Port of Amsterdam will set up joint commercial projects to further develop their hinterland networks.

Amsterdam and Duisburg are well connected by inland shipping, land and rail corridors and are centrally located within the extensive European network. In addition to the existing daily barge connections, an Amsterdam – Duisburg rail shuttle was launched in 2019.

This shuttle forms an important corridor, which directly links the short sea and intermodal networks of both ports.

Port of Amsterdam is part of the H2A consortium, which aims for the import of one million tonnes of green hydrogen to the port of Amsterdam and includes multiple significant players in the hydrogen industry.

The H2A project forms a platform that can now be connected to duisport, allowing for the establishment of an end-to-end value chain for green hydrogen carriers between both ports.