In the November issue of its Monthly Safety Scenario, the Swedish Club focuses on a bulk’s carrier flood inside the engine room. The vessel was loaded with steel cargo in China and was travelling to the Middle East. Eventually, due to an electrical issue it ended up flooding.

The vessel was sailing at 12 knots in the South China Sea, under moderate weather conditions. Everything were running as usual, since the MGPS (Marine Growth Prevention System) sounded an alarm. The duty engineer acted immediately and saw that there was an electrical problem.

For the records, a similar electrical problem had occurred a couple of months before and had been repaired by the personnel. The chief engineer was well-notified of the issue and he ordered an oiler to search if there were any loose wire cables inside the anode assembly.

In the meantime, the MGPS anodes were bolted with flanges directly on top of the sea chest. In the heart of each anode was a small cover where the cable was connected to the anode.

The duty engineer said the oiler to take out the nuts from the cover plate. At the same time, the engineer was helping the oiler with the first two bolts and he also assisted with other posts that were being done in the engine room.

When the oiler removed the fixing nuts for the entire flange, the sea’s water pressure coming from outside, blew off the flange with the anode. As a result, large amounts of water invaded through the sea chest into the engine room. The crew followed the orders of the engineer and blocked the ingress of water, while the oiler was trying to put the flange back, but his efforts were pointless.

The supporting engines were started and the hydraulic valve that could expel water outboard through the ballast pump was opened, and all valves for the emergency bilge pump, fire pump and general pump were also opened so the water could be pumped out.

The personnel turned on all the pumps but it took about 2 minutes to start working again. The main engine also stopped a couple of minutes after the water ingress. After 15 minutes the engine room and steering gear room were flooded with 200 MT of water as the pumps couldn’t keep the water level stable.

The master then realized that they had to evacuate the vessel. The crew were rescued from a lifeboat by a vessel close to the area. After two days, a recover team boarded the vessel and towed it into port in order to be repaired, which took several months. 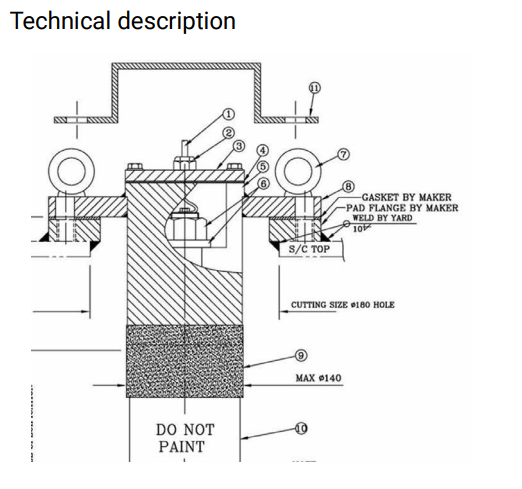 Technical description: The small cover (item 3) is underside the lid. There is a small chamber where the anode
cable (item 1) is connected to the anode (item 10). The chamber is isolated from water. The anode mounting flange (item 8) is what the oiler removed. It is used to secure the anode assembly to the seawater chest. The anode (item 10) is submerged in the seawater chest.

After this unpleasant incident, the Swedish club suggests:

You may see more safety tips on:

September’s Monthly Scenario: Tanker on anchorage runs aground because of a category 2 typhoon