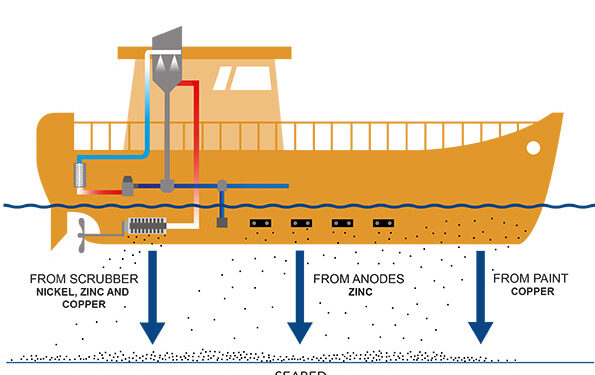 Despite a drive from the global community to make oceans cleaner, ships are the polluting ‘elephants in the room’ nobody is talking about, with nearly every vessel in the world continually releasing substantial amounts of toxic metals into the sea, a new study notes.

The study, led by Dr Gordon Watson of the University of Portsmouth and published in Environment International, coincides with the launch of the UN ‘Decade of Ocean Science’ to focus on healthy seas and a ‘sustainable blue economy’.

It’s ironic that as the world is working really hard to remove plastic pollution, there is, at the same time, highly polluting vessels continuing to pollute the seas right under our noses,

…Dr Gordon Watson, of the University of Portsmouth.

Alongside educating boat owners on using less toxic anti-fouling paints and anodes, Dr Watson and colleagues call for urgent legislation to ensure that shipping is front and centre of sustainable ocean policies.

The United Nations and the world want healthy seas with sustainable ocean policies awash with more offshore wind farms, aquaculture, and sustainable tourism. All those aims are laudable, but toxic metals from shipping, which is critical to all these activities, is a hidden threat to healthy seas and nobody’s really talking about it,

The researchers studied data from the 1980s on the amounts of toxic metals in sediments of the English Channel region from over 300 coastal and offshore sites. Although they found a steady reduction in overall levels of metal contamination in the seabed from the 1980s, 2010-13 showed an increase partially linked to specific metals involved in shipping activities.

Namely, the researchers found that all vessels, from a sailing boat to a cruise ship, release substantial amounts of metals, such as copper, zinc and nickel, which then accumulate in the ocean’s sediments. Specifically:

Shipping – both commercial and leisure – is likely to grow as investment takes off in the global blue economy, a bid to ensure the sustainable use of ocean resources for economic growth, improved livelihoods, and jobs while preserving the health of ocean ecosystem.