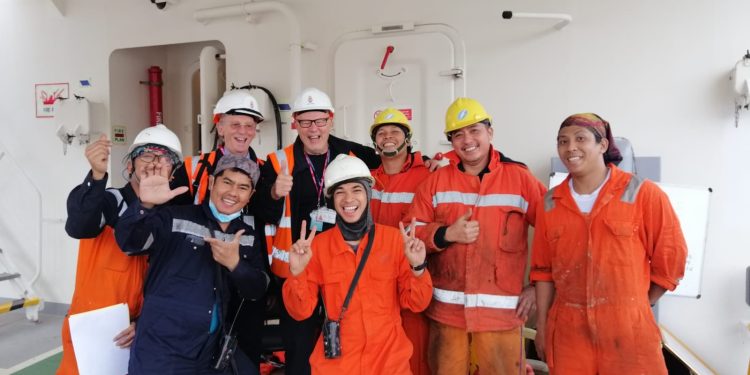 Stella Maris Teesport ship visitors with some of the crewmembers of the ship Image Credit; Stella Maris

Stella Maris announced that the plight of a crew from a bulk carrier who had been denied shore leave and whose work contracts had been extended, has finally ended, following their intervention.

The ship arrived at Tees Dock in Northeast England on the weekend of August 13 and 14, with 22 seafarers on board. On August 15, two Stella Maris’ ship visitors conducted a routine visit, taking with them welcome packs and bags of clothing for the crew.

“During the course of conversation, several crew members indicated that all was not right on board. The ship visitors found out that some of the crew had not been allowed shore leave for up to 10 months. Their contracts had also been extended for up to 10 months,” said Deacon Peter Barrigan, Stella Maris Tees, Hartlepool and Seaham regional chaplain.

This was putting huge mental and physical strain on the seafarers. One of them said that during the voyage to Teesport from the United States, he was only getting two hours sleep a day because he was so stressed and overworked.

Communication with family back home was also limited. There was internet onboard, but it wasn’t very good, the seafarer had said. He was also concerned that the crew were no longer able to operate the vessel safely as they were exhausted.

Worried about the crew’s physical and mental wellbeing, and their safety, the Stella Maris team contacted the Maritime and Coastguard Agency (MCA) and the International Transport Workers Federation (ITF), who visited the vessel on August 17. A vessel detention notice was served that afternoon.

Following that, the seafarers were able to go ashore for the first time in many months. They spent time relaxing at the South Tees Mission Centre. More good news was to follow, as 11 of the crew were repatriated to the Philippines on August 20.