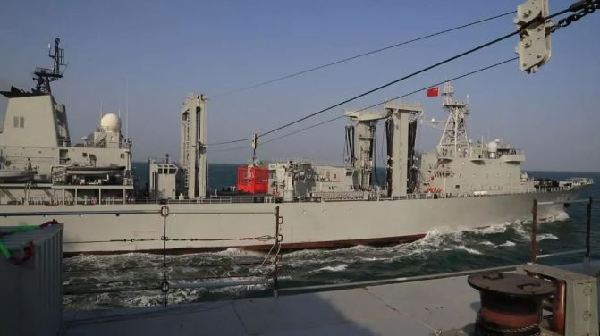 China's PLA Navy is testing a portable underway-replenishment system that can convert any cargo ship with the right deck configuration into a dry stores naval auxiliary.

The development can potentially give the PLA a way to utilize China's 3,500-vessel merchant fleet in case of war.

Using civilian ships to carry out UNREP for naval ships is a new attempt in the field of naval logistics support. The civilian vessels cover a wide range of routes, thus have large potential for replenishment at sea, which implies remarkable military economic benefits.”

The new system was recently deployed aboard a Sinotrans-operated civilian container vessel and the PLA Navy frigate Linyi for the trial.

Also, the civilian ship Fuzhou, as the control ship, was underway and holding station in proximity and was pre-installed the modular replenishment system. Then the dry cargo container on Fuzhou ship was mechanically picked up, engaged to a trolley that rode a wire rope between the ships and raised to the deck of the Frigate Linyi in a process that lasted for about 30 minutes

The success of the test provides important technical support for the future development of underway replenishment control technology.

That was a routine arrangement within the PLA Navy's annual plan and it aims to test and improve the troops' training level, said the PLA Navy's Staff Department, adding that it is not aimed at any specific country or target.