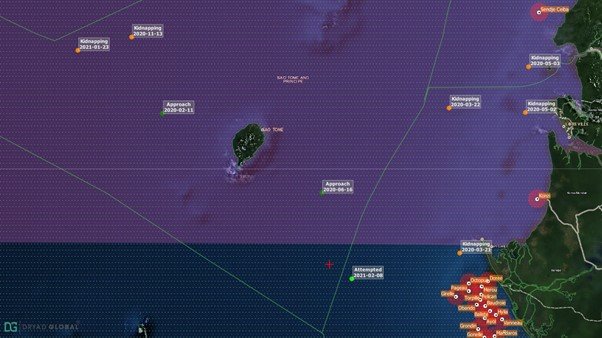 Τhe Gabon flagged fishing vessel Lianpengyu, with 14 crew onboard, has been reportedly hijacked off Port Gentil, Gabon, on February 7.

According to Dryad Global, the Gabon flagged fishing vessel Lianpengyu has been boarded presumed hijacked. Currently, the ship is believed to be 112nm off Ana Chaves – Sao Tome. The crew of 14 Chinese nationals whereabouts remain unknown.

Earlier reports indicate that the MT Seaking sighted a small boat being launched from a suspected mother vessel near by. This incident occurred 14nm SW of the latest sighting of the Lianpengyu. There is a realistic possibility that the Lianpengyu is being used as a mother vessel to facilitate further attacks.

Regarding the MT Seaking, a small boat launched from a mother vessel approached the ship, with the attackers trying to unsuccessfully board the ship. The attack took place on February 8, off Port Gentil, Gabon.

Further reports indicate that the boat came alongside and the attackers attempted to board the vessel using ladders. The master is understood to have taken evasive action and the original boarding failed.

Vessels are reminded that the risk profile for all vessels operating within the Gulf of Guinea is critical at this time with further incidents highly likely and expected daily.

This the 11th offshore incident this year and the 5th successful boarding. Notably this is the third attack recorded within 2021 that occurred out with the JWRC HRA.

It is highly likely that the attack was perpetrated by the same grouping that targeted the Sea Phantom on the 6th February.

In addition to these incidents, an MV was reportedly attacked 56 Nm SW off Sao Tome, on February 8, by a fast craft with several persons onboard.

Shots were fired at the MV and after approximately 45 minutes the attack was aborted.