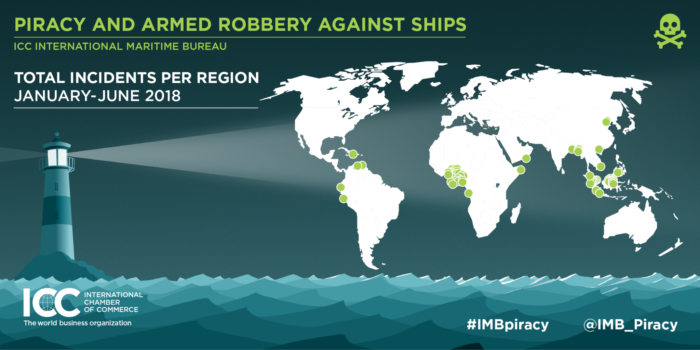 The ICC International Maritime Bureau (IMB) published its second quarterly report. The report says that 107 incidents were reported to the IMB Piracy Reporting Centre (PRC) in the first six months of 2018. In addition, all 2018 crew kidnappings have taken place in the Gulf of Guinea in six separate incidents.

Furthermore, as far crewmembers are concerned the numbers of hostages increased. More specifically:

Nevertheless, the report mentions that the true number of incidents in the Gulf of Guinea is believed to be significantly higher than what is reported.

In addition, the 107 incidents took place on the following kind of ships:

Finally, positive news is that fewer incidents were reported in the Philippines and off Somalia. In fact, except from Gulf of Guinea, the number of 2018 incidents decreased in key piracy hotspots and there were no reported incidents recorded off the coast of Somalia in the second quarter of 2018. This drops the amount of incidents in the Philippines from 13 by the second quarter of 2017 to 3 in the same time period this year.

However, Masters are urged to maintain high levels of vigilance when transiting the high-risk area and to follow the latest version of the best management practices.

In June 2018, the 5th edition of the piracy-specific Best Management Practice (BMP5) was published compiling a useful and comprehensive guidance which introduces effective measures for the protection of crew, vessels and cargo while transiting  the Red Sea, the Gulf of Aden, the Indian Ocean and the Arabian Sea.

The BMP5 were produced and supported by many major shipping associations focusing on the following fundamental requirements: