The hijacking of a small Iranian fishing vessel off Somalia, was the latest incident in a series of hijackings in the so-called High Risk Area (HRA) off Somalia. Although the region had seen piracy incidents decreasing, in recent times they have been revived.

In 2010, a total 49 ships were hijacked by Somali pirates, while over 1,000 were taken as hostages, the International Maritime Bureau informs. Thus, there is an increasing concern that the low piracy numbers in the previous years, might be over.

According to a report published by NGO Oceans Beyond Piracy (OBP) piracy is spreading, as except from HRA, piracy attacks were reported in West Africa as well, with the majority of them occurring in Nigeria. This is confirmed by a recent IMB report, which says that a total of 20 reports against all vessel types were received for Nigeria, in 2017, 16 of which occurred off the coast of Brass, Bonny and Bayelsa. Guns were reportedly used in 18 of the incidents and vessels were underway in 17 of 20 reports. 39 of the 49 crewmembers kidnapped globally occurred off Nigerian waters in seven separate incidents. Other crew kidnappings in 2017 have been reported 60 nautical miles off the coast of Nigeria. 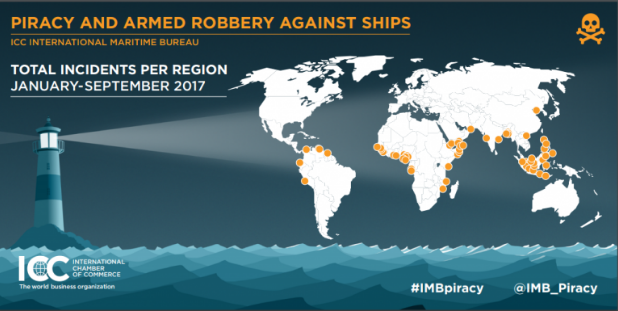 Furthermore, the OBP report show an increase in kidnapping incident in the region, as 96 were taken hostages taken, compared to 44 last year.

Piracy attacks caused economic consequences as well, as the losses rose 10%. In fact, these attacks made some shipping firms spend over $45 million per year, in order to escort their vessels while they sail in Nigerian waters.

The report mentioned as well, that the vigilance of vessels in the area had decreased. Namely, operators did not comply with the best practices document BMP4.

BMP4 instructs ships to register with the Maritime Security Centre Horn of Africa (MSCHOA), prior entering the HRA, report to a military liaison every day while they are in the area, and lastly apply protection measures, including lookouts and physical barriers to prevent boarding.

Beyond that although, Somalia is hit by poverty, famine and illegal fishing, issues that must be addressed in order to decrease piracy.

Nigeria is now trying to obtain strategic maritime safety and security assets, including vessels, according to the director general of NIMASA. The move is aligned with the total spectrum of the country’s maritime security strategy, as recently approved by the Federal Executive Council.

NIMASA would continue collaboration with the military, especially the Nigerian Navy and the Nigerian Air Force, to minimize piracy and maritime crime in Nigerian territorial waters.

Dakuku Peterside, who announced the establishment of a Command and Control Center as part of this maritime security initiative, stressed that the agency would not relax in its quest to see the early passage of the Anti-Piracy Bill, the draft of which the Federal Executive Council recently approved for legislative action.