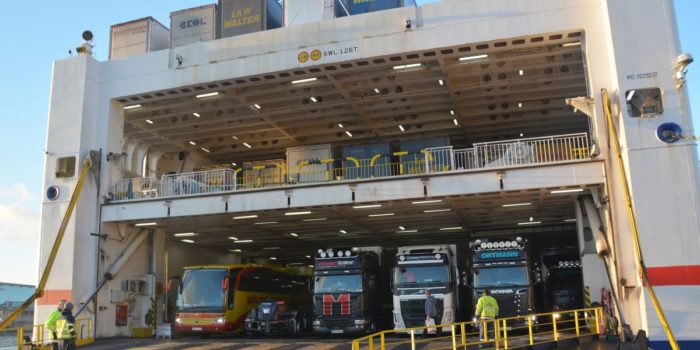 Port of Kiel continues to pursue its growth course in passenger traffic posting a 4.2% increase with 2.2 million travellers. At the same time, the port’s cargo sector was unable to match the top results of the reference period. The handling performance fell by 3.5% to 7.15 tons of cargo in 2018.

The ferry traffic sector is the core business of the port and with 6 million tons, it makes up 80 % of the overall transhipment activities. While the liner services to Norway and to the Baltic States show growth, 10% less tons of cargo were transported on the Kiel - Gothenburg route.

The bulk cargo handling sector concluded the year with a drop of 2.0% at 1.2 tons. The biggest single volume was handled on the Kiel - Klaipeda service of the DFDS shipping company last year. Its frequency had even been augmented intermediately with an eighth and ninth departure in autumn.

Meanwhile, the construction works for the first onshore-power supply plant of the commercial port are in full swing in the city port. The plant, which will supply eco-friendly electricity to the vessels of Color Line, will be completed by Easter. At the same time, a Europe-wide tender for onshore-power supply plants to be installed at Ostseekai and Schwedenkai is being prepared.

The largest individual investments of the Port of Kiel are the on-shore power supply plant at the Ostseekai and the brand-new second terminal for cruise passengers, amounting to 13 million and 9 million Euros. The new building of 3,700 m² abuts the existing one on its northern side and the two of them will form an ensemble. Up to now, two cruise ships have been handled at one Ostseekai Terminal, however in the future there will be a dedicated building for each ship.

Cruise sector sets records
Last year, Kiel was visited on 169 separate occasions by 34 different cruise ships with a total gross tonnage of more than 11.5 million, marking an increase of 15.3 % over the previous year. Approximately 600,000 cruise passengers boarded or left a cruise ship at the different terminals, an increase of 16.5 %.

Until today, 179 visits to Kiel by 33 different cruise ships have been registered. Overall gross tonnage will increase to more than 15 million and the number of passengers could reach 620,000. The most frequent guests this season will be the ships of AIDA/Costa, TUI Cruises and MSC with AIDA and TUI Cruises calling at the port with 4 different vessels each. The biggest cruise ship this year will be the 'MSC Meraviglia' with 171,600 GT and offering 5,700 passenger beds.

The regular season will start on 31st March with a visit by the 'Viking Sky' and will end mid-October.