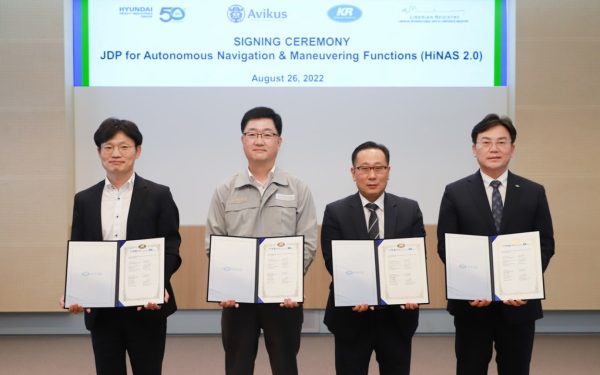 Korean Register (KR) will be collaborating with Hyundai Heavy Industries (HHI) and its subsidiary Avikus as well as the Liberian Registry (LISCR) to commercialize autonomous navigation technology.

The four parties signed a Memorandum of Understanding (MoU) at HHI’s headquarters in Ulsan, Korea on 26 August to collaborate on bringing the Hyundai Intelligent Navigation Assistant System (HiNAS 2.0) to market. HiNAS 2.0 will be installed on KR classed and LISCR registered ships in July of next year.

HiNAS 2.0 uses artificial intelligence to recognize the surrounding environment, such as weather and wave heights, and nearby ships, and then goes beyond providing simple information and controls the vessel’s steering commands and speed in real-time to avoid collision risk.

The system uses augmented reality (AR) to guide optimal routes. The solution was developed for increasing fuel efficiency and to ease the operational burden on bridge teams.

This collaboration is quite significant with the participation of different sectors, including a shipyard, an autonomous navigation solution developing company, a classification society and a flag registry. Based on the results of the collaboration, we will successfully commercialize the HiNAS 2.0 and enhance the safety and economic operation of ships

As for Kyu-jin Yeon, Head of KR’s Plan Approval Center, he added that “while autonomous navigation technology is gradually advancing from smart ships to autonomous ships and then to unmanned ships, the agreement signed today is a new milestone in the transition of the technology.”