The Paris Memorandum of Understanding (Paris MoU) on Port State Control (PSC) conducted a Concentrated Inspection Campaign (CIC) on Safety of Navigation including ECDIS jointly with the Tokyo MOU between 1 September 2017 and 30 November 2017. During the CIC, 4,288 inspections were carried out, with the total CIC detention rate per individual ship being 3.5%.

During the CIC, a total of 4,288 inspections were carried out involving 4,217 individual ships. The overall CIC detention rate per individual ship was 3.5%, with 146 ships being detained.

The CIC-topic detention rate was 1.1%, with 47 ships being detained. A total of 32.2% of the detentions were related to the CIC-topic. The overall number of CIC-topic related deficiencies reported per inspection was 1.1%.

In addition, ships from 87 flag States were inspected during the CIC, of which 63 flag States (72.4%) did not have any CIC-topic related detentions. Of those that did, the highest number of ships detained were:

The total number of CIC-topic related deficiencies reported per inspection was 0.18.

The least favourable results came when asked whether the passage plan covered the whole voyage, with 3.7% responding no. Following, in the question whether the ECDIS had appropriate up-to-date electronic charts for the intended voyage and a suitable back-up arrangement, 2.4% responded no. 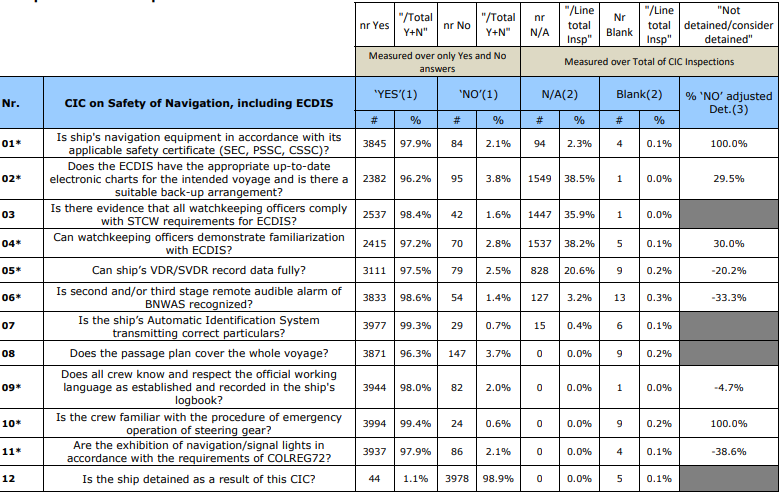 The Report concludes by saying that:

CIC has provided sound evidence that the industry has achieved a good level of compliance with the specific provisions inspected during the CIC of SOLAS Chapter V requirements pertaining to safety of navigation.

Namely, the 1.2% rate for CIC-topic deficiency rates is overall satisfactory.