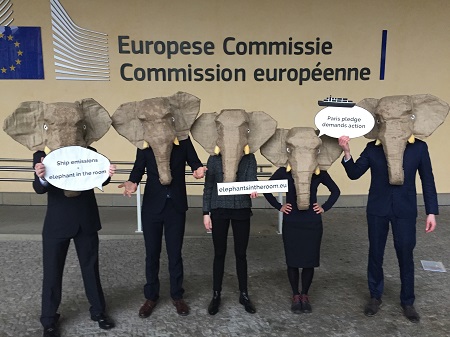 The 1.5/2°C warming limit agreed at the Paris climate summit will be impossible to meet unless Europe and the International Maritime Organisation (IMO) introduce measures to cut shipping emissions, NGOs Seas At Risk and Transport & Environment have warned. Shipping could be responsible for 17% of global CO2 emissions in 2050 if left unregulated, according to an EU study, placing climate action firmly at the top of the EU commissioners and IMO secretary-general’s agenda when they meet in Brussels .

Having escaped explicit mention in the Paris climate deal, emissions from shipping are the elephant in the room and will jeopardise the efforts of other sectors – making it all but impossible to keep global warming well below two degrees , the groups said. The IMO, the UN body tasked with tackling the climate impacts of shipping, has so far failed to grasp the nettle on shipping’s growing contribution to greenhouse gas (GHG) emissions.

Sotiris Raptis, shipping officer at T&E, said: “We welcome the new IMO secretary-general, who is coming to office at a key moment following the Paris agreement. We are sure Secretary-General Kitack Lim fully understands the need for the IMO to act now. The EU in parallel needs to include shipping in its 2030 reduction commitment now and in the EU ETS or in an EU climate fund from 2021.”

John Maggs, senior policy advisor at Seas At Risk, said: “There is no reasonable excuse to continue exempting the sector from the global and EU climate policies. That shipping needs to make its fair share of cuts to keep global warming well below 2 degrees is not negotiable after Paris.”

The European Parliament’s study took into account the IMO’s own research which found that shipping GHG emissions are up 70% since 1990 and are projected to grow by up to a further 250% by 2050. Shipping currently accounts for nearly 3% of global CO2 emissions – higher than those of Canada, Brazil, Indonesia, Mexico, France or the United Kingdom.