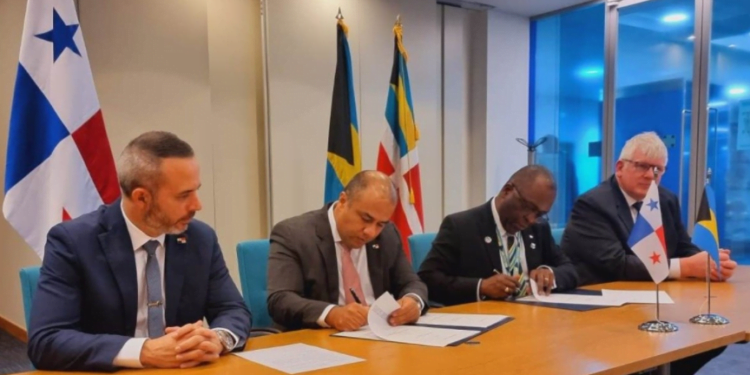 Panama Maritime Authority renewed its bilateral agreements with the United Arab Emirates and the Bahamas so as to promote the national workforce and technical cooperation ties between governments.

According to the Minister of Maritime Affairs, Arch. Noriel Araúz:

“We have taken a momentous step to achieve greater recognition of the competence titles issued by the Panama Maritime Authority (AMP), since in the case of the United Arab Emirates (UAE) we are updating the Agreement and with the Commonwealth of the Bahamas, we signed the Renewal of the Agreement, these important alliances will allow Panamanian seafarers to continue providing service on board ships registered under the flag of these countries, in turn promoting the national workforce and technical cooperation ties between governments are strengthened”.

These events were held within the framework of the thirty-second regular session of the Assembly of the International Maritime Organization (IMO), where the goodwill of the Member States is highlighted in supporting as observers this important event for Panamanian seafarers.

Minister Arauz was in charge of signing by the Republic of Panama these commitments, concerning the Mutual Recognition of Training and Certification in accordance with Regulation I/10 of the International Convention on Standards of Training, Certification and Watchkeeping for Seafarers, 1978, Amended (Convention STCW’78, amended).

As explained, the Update of the Agreement will contribute to promoting collaboration between both institutions, so that future efforts remain focused on improving the training of levels of competence and the processes of certification of seafarers, which guarantee the safety of human life and property at sea, maritime protection and the protection of the marine environment. It will also facilitate the embarkation or contract of Panamanian seafarers to work on board their vessels.

Also, the delegation of the WAP, during the intervention of the Director of the General Directorate of Seafarers (DGGM), Captain Juan Maltez made a significant support in the face of the empowerment of women, providing support to the draft Resolution of the Assembly of the establishment of May 18 as International Women’s Day in the maritime sector, achieving its adoption.

It is expected that with the celebration of this date, it will be possible to commemorate women in this important sector, by continuously promoting their hiring, permanence and sustained employment, promote their visibility and strengthen IMO’s commitment to the Development Goal Sustainable Development (SDG) approved by the United Nations (UN), specifically number 5 (gender equality) and offer help to achieve concrete results by addressing the current gender imbalance.