OPEC crude production fell by 240,000 b/d in February to 30.68 million b/d, its lowest level in 4 years, said Gibson Shipbrokers in its weekly tanker market report. The heavy crude market is already incredibly tight and production cuts come at a time when demand for heavy grades is rising, the report notes.

A disappointing week for previously hopeful VLCC Owners, slow throughout as final March needs were merely dripfed into the marketplace, with full April programmes only in hand from the start of next week.

It should then get busier, at least, but availability looks to continue a challenge. Rates fell away to the very low 60’s East, at best. With rare runs to the West marked at around ws 28 via cape.

Suezmaxes crawled along at bottom hugging marks to ws 67.5 to the East, and ws 32.5 to the West. The supportive Basrah 20 tonne restriction was briefly challenged, but then re-confirmed to at least prop up the bottom line that would have otherwise collapsed.

Aframaxes failed to hold on to last week’s improvement and Charterers chipped away to lead rates back to 80,000mt by ws 95 to Singapore, with a fightback looking unlikely over the near term now.

Quite heavy early week trading gave Aframax Owners some hope, but then the cargo flow reduced to a drip feed, and rates were left at down to a lowly 80,000mt by ws 85 X-Med and ws 100 from the Black Sea. A slightly finer balance is now in play, but it will be hard work to engineer anything much better over the short term.

Suezmaxes drifted sideways/slightly southerly on modest attention though a heavy-ish forward CPC programme gives some expectation of a counter-weight to the sentiment dragging West African scene. 140,000mt at down to ws 72.5 now from the Black Sea to European destinations with around $2.8 million payable for runs to China.

Aframaxes began upon the backfoot but gradually got themselves into better shape as fog returned to add supportive disruption. The end result wasn’t spectacular, however, and rates could only creep up to 70,000 mt by ws 105 upcoast.

VLCCs continued to track lower on good competition, and limited demand. Rates eased further to $6.2 million from the US Gulf to South Korea and further discounting threatens before any rebalancing can return. 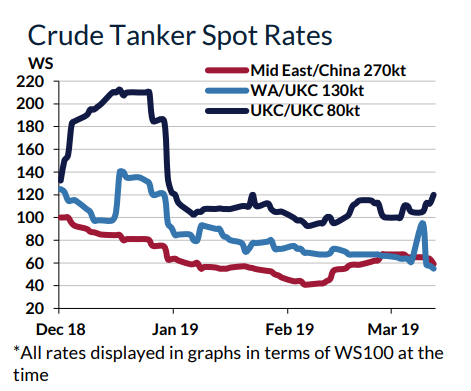 Charterers refused to go bargain hunting even at those numbers and another worrying week looks on the cards. VLCCs operated to a slow bell that rang to the weaker AGulf tune, rates fell off sharply to ws 56.5 to the Far East and will remain under pressure if the Middle East recovers.

Aframaxes here were the best performers in their class. Nothing special, but busy for most of the week and rates gained to 80,000mt by ws 120+ XUKCont and to 100,000mt by ws 97.5 from the Baltic but the week closed upon a slower beat, and Owners will be more minded to consolidate than push for higher early next week.

VLCCs found occasional interest but had to accept lower values to equalise with the softening elsewhere. Crude oil from Hound Point to South Korea moved at $5.75 million, with the fuel ‘arb’ from Rotterdam to Singapore effectively out of play at sub $4 million for traders to even take a look. 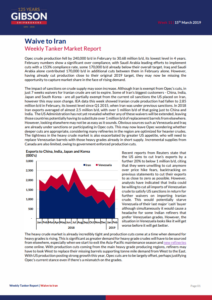