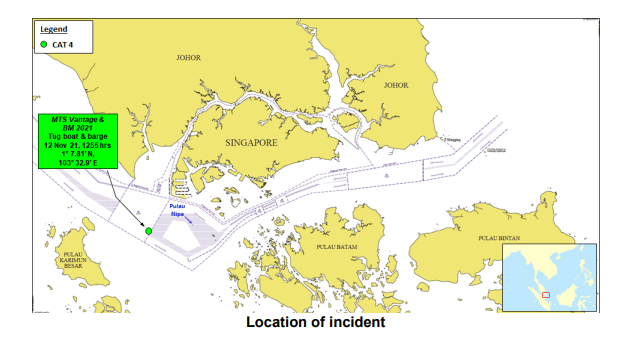 During 9-15 November 2021, one incident of armed robbery against ships in Asia was reported to the ReCAAP ISC.

The CAT 4 incident occurred on 12 Nov on board a barge towed by a tug boat underway in the Singapore Strait at approximately 6.5 nm south west of Nipa Island (Indonesia).

As explained, one unauthorised person was sighted disembarking from the barge. A search on board the barge was conducted, and some ship stores were stolen. The crew was safe and accounted for.

With this incident, a total of 37 incidents were reported in the Singapore Strait since January 2021.

What is more, during 9-15 Nov 21, one incident outside Asia was reported to the ReCAAP ISC by ReCAAP Focal Point ( (Singapore). The incident occurred on 8 Nov to a RORO car carrier while anchored at Callao, Peru.

To remind, ReCAAP ISC recently issued its montly report for October 2021, summarizing that the total number of incidents of armed robbery against ships in Asia from January to October 2021 has decreased compared to the same period in 2020.