One dead as ship capsizes at Port of Castellon 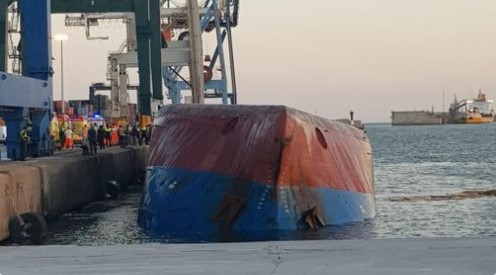 The general cargo ship ”Nazmiye Ana” capsized as it was conducting cargo loading operations at Port of Castellon, Spain, on May 28.

According to local media, one seafarer has lost his life,while another port worker is missing.

What is more, two injuries also took place during the incident, one of whom is in a serious condition.

Furthermore, it is reported that 10 people are believed to were thrown into the harbor, including crew from the ship and dockworkers.

As of now it is not sure if the vessel capsized because of the cargo operations or if it lost stability due to a containers imbalance.

Moreover, anti-pollution barriers have been placed the ship to contain a fuel spill.