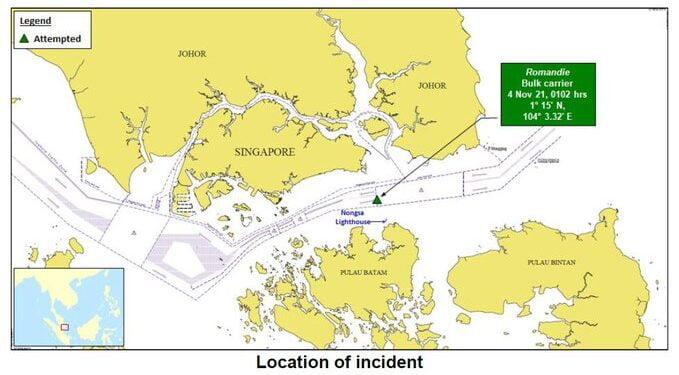 During 2-8 Nov 2021, one attempted incident of armed robbery against ships was reported to the ReCAAP ISC. The incident occurred to a bulk carrier while underway in the eastbound lane of the Traffic Separation Scheme in the Singapore Strait.

According to ReCAAP ISC, the incident occurred on 4 Nov at approximately 3.2 nm northwest of Nongsa Lighthouse, Batam Island (Indonesia).

The ship crew, while patrolling on deck anti-piracy rounds, sighted two perpetrators climbing from ship stern railing. He raised the alarm immediately and shouted at the perpetrators who aborted the attempt to board the ship. A search on board the ship was conducted with no further sighting of any unauthorized persons. All crew were accounted for. Nothing was stolen.

With this incident, a total of 37 incidents were reported in the Straits of Malacca and Singapore (comprising 36 incidents in the Singapore Strait and one incident in the Malacca Strait) since January 2021.

As informed, there is no incident of abduction of crew reported since the last incident in January 2020 up to today, and no crew is currently being held in captivity by the Abu Sayyaf Group (ASG).

Concluding, the threat of the abduction of crew in the Sulu-Celebes Seas and waters off Eastern Sabah remains high particularly in the areas of Sulu and nearby waters off Tawi-Tawi.