Oil supplies may not be enough through 2050, says Rystad

The world will run out of sufficient oil supplies to meet its needs through 2050, despite lower future demand due to the Covid-19 pandemic and the accelerating energy transition, says Rystad Energy.

This will not happen if exploration speeds up significantly and capital expenditure of at least $3 trillion is put to the task.

To meet the global demand over the next 30 years, undeveloped and undiscovered resources totaling 313 billion barrels of oil need to be added to currently producing assets. Rystad Energy calculates that to match this requirement, exploration programs will have to discover a worthy-to-develop resource of 139 billion new barrels of liquids by 2050, an impossible task if this decade’s low exploration activity levels persist.

The target is high because not all existing discovered volumes are profitable to develop. In theory, the total undeveloped supply would amount to 248 billion barrels of oil between 2021 and 2050. However, when we dive deeper into these discoveries and look at their discovery decade and current status, we find that about 74 billion barrels are highly unlikely to materialize and need to be replaced by new discoveries

Looking at the global conventional exploration potential, there are two main sources for these new volumes: further appraisal of existing fields and resources, and new discoveries.

The first source includes projects in their early production stage, projects under development, and unrisked volumes in discovered assets. Rystad expects that some future exploration activity will lead to reservoir delineation and enhancement of resource estimates, while technological improvements and other secondary recovery techniques will also increase recoverable volumes.

Analyzing the discovery rates of the current decade and the latest trends, Rystad Energy expects that global conventional discovered liquid volumes could settle at around 4 billion barrels per year, with an average discovery size of around 40 million barrels. This means that explorers would need to announce at least 100 new conventional discoveries each year to reach the magic volume number needed to meet demand. 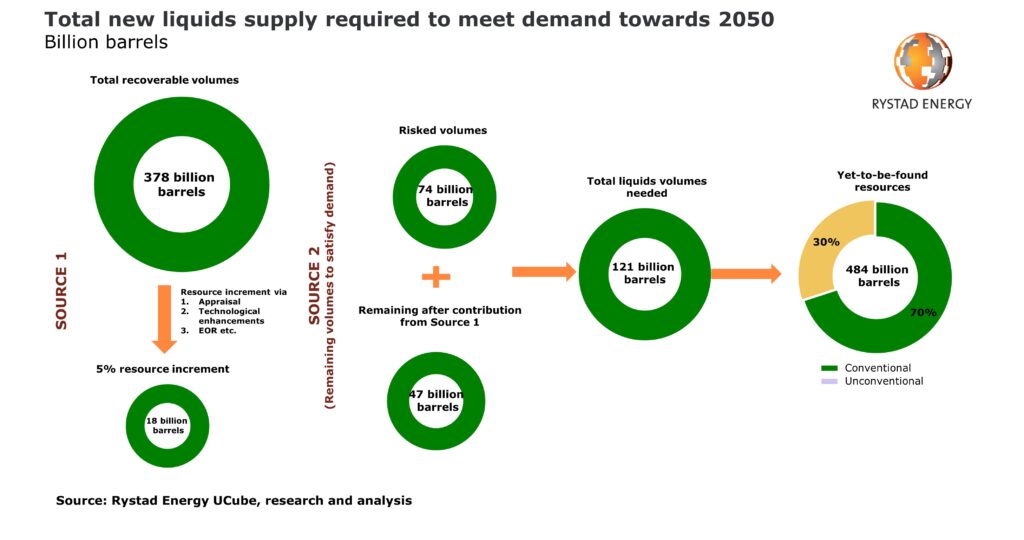 However, just like in the past, not all volumes discovered during this period will be developed and produced, and much of it may not be brought on stream to meet demand by 2050. The total discovered volumes will therefore have to be much higher than the required cumulative liquids supply.

The global exploration success ratio has fell sharply, from about 72% in 2010 to 17% in 2020. As “easier” hydrocarbons are already discovered, it will become increasingly difficult to find new resources in mature areas, and a more stringent exploration approach means that only the top-ranked prospects will be drilled. It is therefore expected to see an average success ratio of 15% to 20% through 2050. A 20% ratio requires around 500 wells to be drilled each year, or 650 wells at a 15% chance of success.

In addition, deepwater offshore areas will continue to dominate future new discovered volumes. More challenging drilling environments will push the average well cost to about $50 million, lifting the annual cost of exploration drilling to between $25 billion and $33 billion in at the above success rates.

In addition to drilling, discovering these volumes will require spending on geological and geophysical studies, leasehold costs and signature bonuses to be paid for future lease rounds.

Furthermore, appraisal drilling needs to be carried out to get the 5% incremental volumes mentioned previously. This would require further spending of about $45 billion.

Altogether, we estimate that the cumulative exploration cost required to satisfy liquids supply from conventional sources could be between $3.8 trillion and $5 trillion through 2050. However, as these figures are based on historic assumptions, costs could be pushed down significantly – potentially to around $3 trillion – thanks to fast-tracking of discovered resources and some giant discoveries