Offshore wind in California could become part of the least-cost portfolio, report says

A new report by Castle Wind, noted that offshore wind power is growing rapidly around the world, driven by dramatic cost reductions and increased interest in carbon-free energy sources. While most offshore wind projects to date have used fixed-base platforms, there is growing commercial experience with floating-base applications that will unlock wind resources in deeper waters, such as those off the coast of California.

California is a large potential market for offshore wind due to its ambitious clean energy policies and economy-wide greenhouse gas (GHG) reduction goals. While California leads most states in renewable energy deployment, it will need several times more renewable energy capacity than is currently installed to meet its long-term policy commitments.

While California has studied optimal pathways and different scenarios for meeting its clean energy goals, it has yet to fully investigate its offshore wind potential. California’s long-term planning studies, which inform the state’s energy procurement, transmission investment, and associated policy decisions, have not formally modeled offshore wind as a future supply option for GHG-free energy.

The RESOLVE model was given an unlimited amount of offshore wind potential in order to estimate the optimal capacity without regard to current federal offshore wind call areas or to existing onshore transmission limitations. The study finds that offshore wind could be a valuable and significant resource for meeting the state’s long-term climate goals:

While this study identifies the economic opportunities presented by offshore wind, it does not make any policy recommendations or purport to answer questions related to offshore wind transmission needs, lease areas, future performance and cost improvements, supply chain and infrastructure development, and associated investment and job creation, each of which may merit more detailed studies

This report focuses on the high-level economics of offshore wind and the potential scale at which this resource may help achieve California’s long-term policy goals. 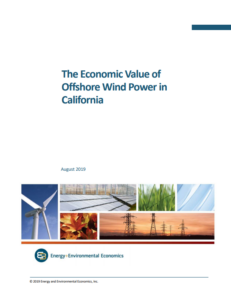