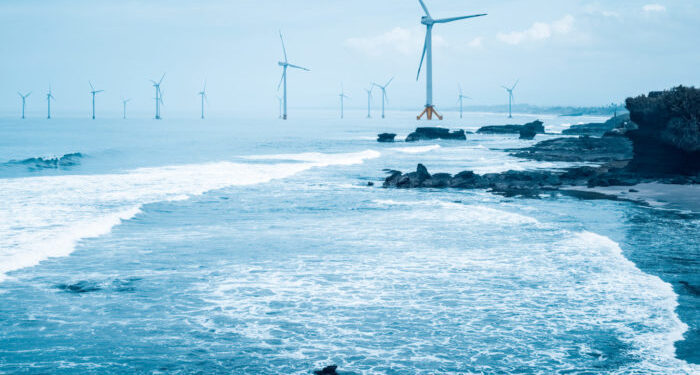 The Hamburg Institute of International Economics (HWWI) has drafted a new market analysis on offshore wind energy and decommissioning under the INTERREG-North Sea project „DECOM Tools“, which aims to devise and develop eco-innovative concepts for offshore decommissioning.

The market analysis, concerning offshore wind and decommissioning in the North Sea Region, reveals the number of turbines coming into question for decommissioning will steadily increase from 2020 onwards.

Despite offshore wind energy being a young industry the number of affected turbines was larger than expected,

Europe as the pioneer in offshore wind energy possesses the oldest offshore facilities.

This gives rise to the opportunity to set the global standard for decommissioning in the sector of offshore wind.

A requirement for a successful decommissioning is, apart from aligned logistic processes and new recycling procedures for composite materials in the wings, an appropriate infrastructure.

Particularly Northern Germany with its ports can establish important locations for future activities and attract a significant part of the value chain with the related downstream processing activities,

Apart from infrastructural bottlenecks there is a foreseeable lack of qualified employees to organize the decommissioning process. But if the ports and related industries now adapt to the upcoming challenges, there emerges a new field of activity for the Northern German locations, 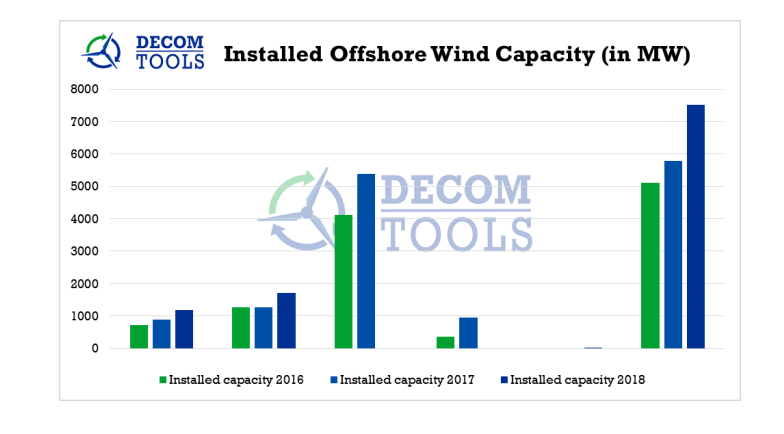 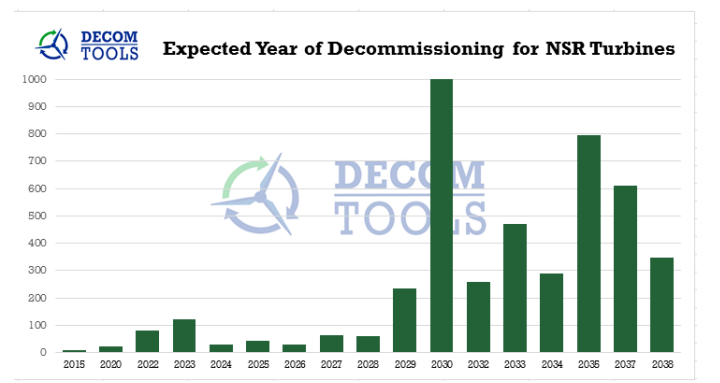 In 2018, one wind farm of seven turbines and a capacity of 10.5MW was decommissioned in Europe, more specifically Utgrunden I wind farm in Sweden.

The wind farm was commissioned just in 2000 underlining that decommissioning can also come into question before the expected life cycle of 20- 25 years has expired.

After the wind park Yrre Stengrund this was the second decommissioning project successfully conducted in Sweden.

Other decommissioning projects were realized in the UK in 2017, 2004 and 2000 as well as in Germany (Hooksiel) and Denmark (Vindeby).

Apart from that, the number of decommissioned wind farms in the NSR is rather limited.

Also, the experience differs significantly between the different NSR countries as well as the relevance of decommissioning offshore wind farms due to different construction dates and operating ages.

As it has been shown above, the year of decommissioning of a wind farm depends on various factors.

On the one hand, mechanical attrition and the expected repair cost play a major role when considering how long a wind plant shall operate.

Another factor is the legal allowance determining a specific year for decommissioning which might be delayed in certain cases.

Moreover, expiring funding for wind plants might also be a reason to antedate decommissioning.

Since experience with decommissioning is rare and legislation as well as technologies, skills and infrastructure still need to be developed, it appears fruitful to look at the current regulation, debates and possible outlooks. Particularly the question how radical decommissioning is to be carried out will play a major role in the future not only when it comes to decommissioning costs but also with respect to ecological aspects, repowering or infrastructural requirements.

The project “DECOM Tools” gathers partners from Germany, Denmark, Belgium, the Netherlands, the UK and Norway in a four-year project, funded by the INTERREG-North Sea program of the European Union, to develop eco-innovative concepts for offshore decommissioning. The overall budget amount to about 4.7 million Euro. 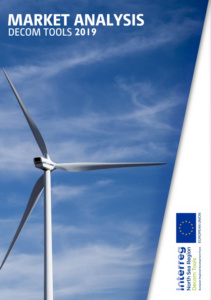