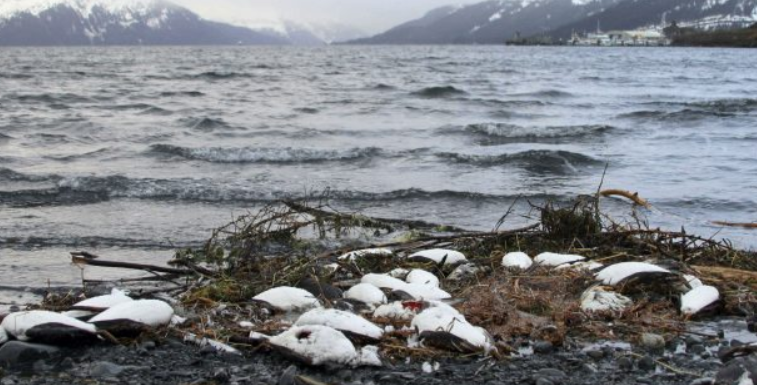 Credit: Center for the Blue Economy

The University of Washington though its new study, revealed that the massive marine heatwave in the northeastern Pacific during 2014-2016, known as "the Blob", has negative impacts upon the ocean food chain. Specifically, millions of seabirds along the US west coast lost their lives, as it is expected to become more frequent due to climate change.

For the records, "the Blob" ocean warming phenomenon off the Pacific coast, first occurred in the fall and winter of 2013, and persisted through 2014 and 2015.

With the sea waters getting even warmer, this leads to a shortage of the fish that the birds feed on. Meaning that higher temperatures impact birds' food supply.

Food demands of large commercial groundfish like cod, pollock, halibut and hake were predicted to increase dramatically with the level of warming observed with the blob, and since they eat many of the same prey as murres, this competition likely compounded the food supply problem for murres, leading to mass mortality events from starvation.

... said lead author John Piatt, a research biologist with the U.S. Geological Survey and an affiliate professor at the University of Washington.

Namely, researchers informed that the decrease supplies of plankton, results less availability of the small forage fish that murres depend upon.

According to scientists, 62.000 common murres were found dead on shores from California to Alaska in 2015 and 2016, while about a million birds are estimated to have died as they starved to death.

We believe that the smoking gun for common murres — beyond the marine heat wave itself — was an ecosystem squeeze: fewer forage fish and smaller prey in general, at the same time that competition from big fish predators like walleye, pollock and Pacific cod greatly increased.

...said Julia Parrish, a UW professor in the School of Aquatic and Fishery Sciences.

Moreover, the majority of the birds found were adults, while the murre breeding rates reported that fell off sharply in the following period.

The magnitude and scale of this failure has no precedent. It was astonishing and alarming, and a red-flag warning about the tremendous impact sustained ocean warming can have on the marine ecosystem.

Apart from murres' death from the marine heatwave, "the Blob" phenomenon caused the life of several tufted puffins, Cassin’s auklets, sea lions and baleen whales. But the common murre die-off was by far the largest ever measured.

Concluding, the research was funded by the USGS Ecosystems Mission Area, the North Pacific Research Board, The National Science Foundation and the Washington Department of Fish and Wildlife.