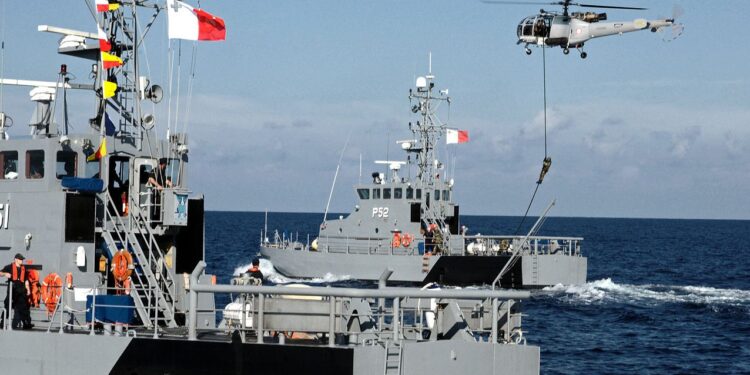 Above image is used for illustration purposes only / Credit: US Navy

In a recent white paper, Oceans Beyond Piracy explores the model of Vessel Protection Detachments (VPDs), uniformed military personnel embarked on a vessel with explicit approval of the Flag State. Unlike private security actors at sea, VPD operators are trained to follow strict and defined rules of engagement through traditional military chain of command.

VPDs most commonly match the nationality of the vessel or are procured and regulated through a Memorandum of Understanding or Status of Forces Agreement between the home state of the VPD and the Flag State of the Vessel.

Yet in the commercial maritime setting, VPDs may have to act on their own, including in matters relating to the use of force. Some governments have gone so far as to codify such relationships in order to provide their operators with the legal latitude necessary to respond to seaborne threats at will. For example, the Italian Ministry of Defense signed a Memorandum of Understanding with Italian Ship Owners Association indicating that ship Masters have no responsibility to oversee VPD personnel.

The VPD is simply performing point-to-point protection against piracy and armed robbery. Neither the VPD nor the civilian client vessel is authorized to patrol the seas, board, inspect or arrest suspect pirate ships.

This issue came to a head in 2012 during the Enrica Lexie incident, where Italian marines as part of an embarked VPD aboard the Enrica Lexie opened fire and killed two Indian fishermen. India’s perspective, that armed security personnel on merchant vessels are posing a danger to their nationals, may lead some coastal states to call for further regulation of VPDs, and for their roles, rights, and obligations to be clarified in international law. The Italian viewpoint is that the two Marines cannot be detained by India, that the incident occurred in international waters, and that the accused are further immune from prosecution due to their official status.

Additional challenges faced by VPDs are similar to those of PMSCs. Some challenges include:

However, challenges remain in clarifying the roles, activities, and Rules of Engagement for VPDs operating aboard vessels from various flag states and through the territorial waters of several coastal states. Some coastal states may argue that the embarkation of armed military personnel on privately owned and operated vessels could prejudice the merchant vessels’ status under the regime of innocent passage. To avoid future conflict, OBP suggests that what is needed is a globally accepted framework harmonizing the embarkation and activities of VPDs, as well as standardizing the relationship between VPD and the Master of the commercial vessel. 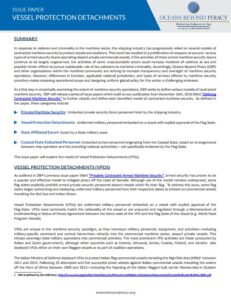