The US National Transportation Safety Board (NTSB) issued an investigation report on the fire onboard the fishing vessel ‘Logger’ while underway in Bering Sea, off Alaska in July 2018. The investigation could not establish the exact cause of the fire.

On 28 July 2018, about 0500 local time, the fish tender ‘Logger’ caught fire while under way in the Bering Sea off the coast of the Alaska Peninsula, about 55 miles west of Port Moller, Alaska.

The crew of three attempted to fight the fire with portable extinguishers. However, this was proven unsuccessful and they evacuated to a nearby fishing vessel that had been sailing with them.

There were no reports of injuries or pollution. The Logger, valued at an estimated $450,000, eventually sank and was declared a total loss.

The National Transportation Safety Board determines that the fire aboard the fish tender Logger likely originated in the engine room from an unknown source.

The deckhand on watch did not know the source of the fire when he first saw it in the stairs leading down to the engine room.

He did not notice any problems during the time he had completed a round in the engine room, about 20 minutes prior to smelling the smoke.

No fire detection alarms sounded, which would have given an indication of the compartment in which the fire originated.

Since the vessel burned completely and sank in an unknown location, and underwater survey or recovery efforts were not undertaken, investigators were unable to determine the source and cause of the fire.

When the captain was asked by investigators where the fire started and what may have ignited it, he surmised that it may have been wiring that led to the forepeak for the fish hold pumps.

His reasoning for that potential source was based on the smoke he saw emanating from the main deck and the wooden planks of the false deck, which indicated to him that there may have been a fire below the deck.

He noted that the fire had to be substantial in size for smoke to penetrate the deck.

However, he stated that the propagation of the fire was so rapid that he could not confirm this possibility with certainty. 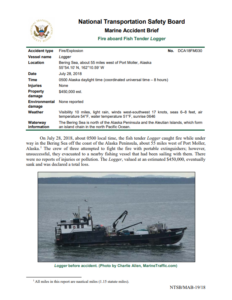