​NTSB published its report on the contact of Mary Lucy Lane Tow with Markland Locks and Workboat Gibson. The incident took place on December 18, 2018, on the Ohio River.

The 140-foot-long, twin-propeller towing vessel Mary Lucy Lane began its planned 940- mile southbound voyage on December 11 with 8 crewmembers on board.

The vessel was scheduled to pick up and drop off barges along the Ohio River between East Liverpool, Ohio, and Cairo, Illinois. The tow departed Cincinnati, Ohio, on December 18, after picking up barges. The Mary Lucy Lane was pushing a tow of 12 barges in three strings (rows) of four barges (an empty lead barge followed by three loaded barges); combined, the vessel and tow’s length was 930 feet, its width was 105 feet, and its deepest draft component (Mary Lucy Lane) was 10 feet.

On December 18, the Mary Lucy Lane arrived in the vicinity of the Markland L&D, about 3.5 miles downriver from Warsaw, Kentucky. The tow waited in the queue to transit the lock. Also at the dam was the Gibson, a 40-foot-long Corps of Engineers workboat equipped with a 1.5- ton crane and used for debris removal and maintenance of the Markland L&D and other nearby locks and dams. At the time of the accident, the Gibson was unmanned and moored next to its work barge in a sheltered area behind the upriver guide wall at the Markland L&D.

After the lock operator radioed the Mary Lucy Lane and gave permission to commence the approach to the main lock chamber, the Mary Lucy Lane got underway from the federal mooring cells (mile 530.4), about 0.9 miles upriver from the Markland L&D. One deckhand was stationed on the port lead barge, and another deckhand was stationed on the starboard lead barge to aid in the transit.

Dam security camera video footage showed the Mary Lucy Lane tow approaching the lock, parallel to the left descending bank. The pilot on board the Mary Lucy Lane had transited with tows through the Markland L&D many times previously and stated that the area leading up to the lock was “very narrow” because of a protruding point just upstream before the entrance.

He stated that “the river was up” and the current swift, and he slowed the engines to keep his approach speed at about 3.5 miles per hour. As the tow got closer, its speed increased, so the pilot slowed it by putting the port engine in neutral. At 1534, the aft end of the tow was drawn toward the guard wall due to what the pilot described as “cross current” (outdraft). Video footage showed that at 1550, the Mary Lucy Lane was no longer lined up on the inside of the guard wall.

The pilot said that the deckhand on the starboard lead barge radioed when the tow was 200 feet from the end of the guard wall. The tow was drawn quickly toward the dam, and the pilot put both engines ahead to move the tow to the forebay.

The pilot said that increasing speed did not correct the approach, so he began alternating the port and starboard engines with ahead and astern commands, and he positioned the head of the tow into the forebay. The tow continued to be pulled toward the dam, and when striking the guard wall seemed imminent, the pilot sounded the vessel’s general alarm.

At 1541:31, the tow struck the guard wall’s protective bullnose between the second and third barges of the starboard string, which parted the tugboat’s starboard facing and wing wires. The pilot applied full-ahead on both engines to move the rest of the tow into the forebay and away from potentially being swept into the dam gates.

As the end of the tow was about to clear the guard wall, the pilot reversed propulsion to full astern. Despite this, at 1542:25, the center string’s lead barge, WCAO 116, struck the protective bullnose on the shoreside guide wall, and a large chunk of concrete broke off in the collision.

The guide wall stopped all forward motion of the center string and the Mary Lucy Lane; however, the towing wires on the portside string parted, and the four portside barges continued forward into the sheltered area behind the guide wall where the Gibson was moored. At 1542:36, the lead port barge ART 36109 struck the Gibson’s stern.

No injuries or pollution resulted from the accident, and the locks were closed to navigational traffic. The center string of the tow came to rest diagonally, wedged in the forebay. The WCAO 116 was impaled at the bow on the guide wall’s protective bullnose.

The next day, the WCAO 116 was successfully pulled off the guide wall. Since the four towing wire winches were inoperative, the crew temporarily remade the tow with conventional rigging wires and ratchets.

Later that night, the tow cleared the main lock chamber and proceeded to a barge fleeting area 4.5 miles downriver. Four days later, after its winches were replaced, the Mary Lucy Lane tow continued its voyage.

The National Transportation Safety Board determined that the probable cause of the contact of the Mary Lucy Lane tow with the Markland Locks and workboat Gibson was a strong outdraft above the dam caused by the extreme high flow conditions, which overwhelmed the pilot’s ability to control the Mary Lucy Lane tow before locking. 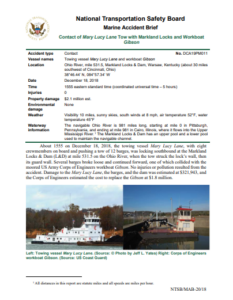