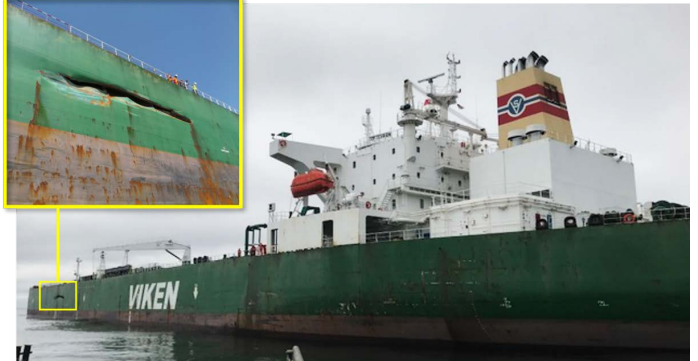 The US National Transportation Safety Board (NTSB) issued an investigation report on the collision of the fishing vessel 'Polaris' with the tanker 'Tofteviken' in the Atlantic Ocean in May 2018. NTSB identified a poor lookout as key cause of the accident, in breach of COLREGs.

On 12 May 2018, about 1913 local time, the fishing vessel Polaris transiting with a crew of 7 and the tanker 'Tofteviken' with a crew of 25 collided about 30 miles south of Montauk, Long Island, New York, during daylight and good visibility.

There were no reports of pollution or injuries. Both vessels sustained hull damage amounting to $716,047.

Maintaining a proper lookout, by sight and sound, is a fundamental rule of the COLREGS for vessels on the high seas, regardless of their size or activity. Yet, the Polaris mate on watch was occupied with a cleaning task in the pilothouse. He therefore did not keep a proper lookout or notice any danger or risk of collision until he heard the port paravane making contact with the hull of the Tofteviken.

The captain of the Polaris confirmed that it was routine to clean the pilothouse on the return trip to port to avoid having to clean the vessel once it was alongside and thereby delaying the crew from immediately disembarking the vessel. The mate stated that occasionally he would leave the pilothouse unattended, which was not uncommon during his watch.

This practice, accepted by the captain as well as by the company, did not promote effective watchkeeping and distracted the mate from maintaining a proper lookout.

Further, although the mate on the Polaris had radar available, he was checking it at infrequent intervals and without the use of long-range scanning, which, collectively, could have alerted him to the developing collision course with the tanker.

The third mate on the Tofteviken did not use all available means to determine the risk of collision, the investigation found.

Although she identified the fishing vessel visually and by radar at a distance of about 8 miles, she did not adhere to company policy that required her to utilize the ARPA and radar guard rings for acquiring contacts.

Instead, she only placed an EBL on the Polaris’ radar target; however, investigators found no evidence that she monitored the progress of the vessel in relation to the EBL.

Furthermore, the third mate did not follow the master’s standing orders and company policy that required her to notify the master, who was on the bridge at the time, of the Tofteviken’s proximity to the Polaris.

The master was only alerted to the fishing vessel’s proximity by the chief engineer, who upon arriving on the bridge instantly recognized the dangerous situation that had developed. Once the master realized that the collision was imminent, he took action to avoid the collision, but it was too late.

In this case, the third mate on the Tofteviken expected the Polaris was going to pass astern of them. To bolster her confidence of this expectation, the AB shared that he too believed the vessel would pass astern.

Having her expectation reinforced could explain why she did not utilize the functions of the ARPA or monitor the relative motion of the Polaris as it was approaching. However, had she followed the master’s standing orders, this accident could have been avoided.

Non-navigational routines should never interfere with the primary task of a watchstander or a bridge team member to maintain a proper lookout. Should performance of another task or duty be necessary, an extra lookout should be posted.

Early communication can be an effective measure in averting close quarters situations. The use of VHF radio can help to dispel assumptions and provide operators with the information needed to better assess each vessel’s intentions.

On the Tofteviken, the third mate did not identify that there was a risk of collision because, based on her observation that the fishing vessel seemed to have altered course to starboard, she expected that the Polaris would pass astern. 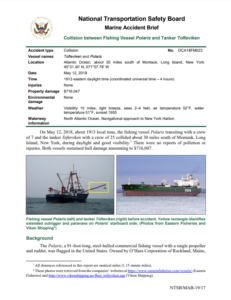