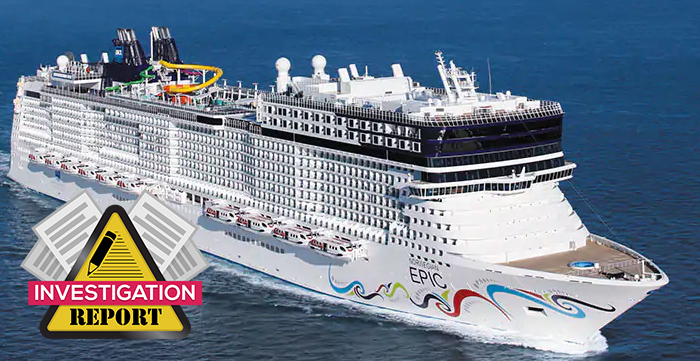 NTSB Norwegian Epic report: Lack of coordination between Master and Pilot led to contact with pier

The cruise ship Norwegian Epic contacted two mooring dolphins while docking at San Juan Cruise Port Pier 3. The NTSB issued an investigation report on the incident identifying lack of coordination between the master and pilot as key cause of the accident.

None of the 6,023 persons onboard were injured, and there was no reported pollution.

The National Transportation Safety Board determines that the probable cause of the contact of the cruise ship Norwegian Epic with San Juan Cruise Port Pier 3 was a lack of communication and coordination between the master and pilot, which resulted in a poorly executed docking maneuver.

The National Weather Service issued a small craft advisory with wind gusts greater than 20 knots for the docking period, and the master, pilot, and tug captains all stated that wind speeds and directions at the time of docking were consistent with those predictions.

Both the master and pilot stated that they felt the ship could be docked in the conditions encountered and with the tugs used.

A review of US Coast Pilot passages regarding the current in San Juan Bay found that eastern trade winds generally caused a west drift to the current.

The pilot was heard on the VDR recording stating that the current was “only one knot ebbing.” The resulting forces from the wind and current set the Norwegian Epic west towards Pier 3.

According to both the master and pilot, they discussed the docking maneuver during their initial master/pilot exchange.

The pilot told the master on numerous occasions that they needed to head towards Pier 4, which was east of Pier 3.

As was customary with all cruise ships in the San Juan port, the master docked the vessel, and the master and pilot stated that they would use two tugs for docking.

Although the master and the pilot discussed the use of tugs, they did not discuss how the tugs would be controlled or who would control them.

The master was only heard giving one verbal order regarding the tugs (just prior to the vessel’s contact).

According to the parametric data from the VDR, there was a point in the maneuver when both the tugboats and the thrusters were in opposition to each other’s actions, demonstrating the lack of coordination between the master and the pilot, beginning with the master/pilot exchange and continuing throughout the docking evolution.

Many of the pilot’s orders to the tugs and the tug captains’ replies were in Spanish. The pilot should have related his commands to the captain in English. The master also used gestures instead of verbal orders.

Perhaps this could have worked if the master and pilot had agreed upon this method, but this was the first time they had worked together, and they had not previously agreed to this method of communicating tug orders.

The master used the bow thrusters to push the bow toward the dock when the bow was closing on it; he did not use full bow thruster power away from the dock until about 1724:36, seconds before impact with the first dolphin.

Investigators only heard one reference to distance on the VDR.

Frequent reports of the vessel’s distance from various reference points regarding clearances from both the other cruise ship and Pier 3 might have given the master a better appreciation of his vessel’s close approach to the dock. This would have given the master better indication of what thrusters to use, the power at which to run them, and direction to move the ship, as well as how to use the tugs. 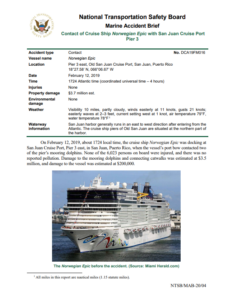