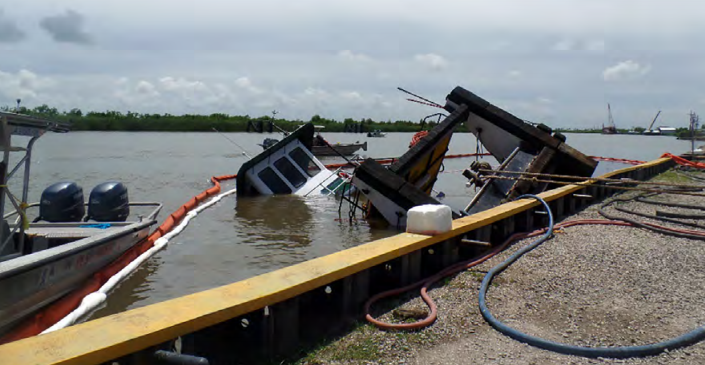 The US NTSB issued its 'Safer Seas Digest' annual report providing an overview of key lessons to be learned from the most major maritime casualties. Remote engine shutoffs and quick-closing valves, high-water/high-current conditions, and training for emergencies were some of the key safety issues in need of attention in the year 2018, the report finds.

The leading cause of accidents in the 2018 reporting year involved towing vessels that were operating during challenging high-water/high-current conditions in inland waters.

When these conditions exist, additional precautions should be taken to mitigate the risks of flooding, capsizing, losing control of the vessel and tow, and tow breakaways.

Examples of mitigation measures include:

Despite watertight integrity being a fundamental principal of safe operations on water, the failure to maintain it continues to be a common cause of accidents, topping the list of causes in the 2017 reporting year and ranking number two this reporting year.

An unexplained list or reduced freeboard should be investigated immediately, and sources of water ingress should be reported and repaired before operations continue.

An actual emergency is a poor time to discover that training and drills have been ineffective.

All crew members should be familiar with and able to employ the firefighting and lifesaving appliances on board a vessel.

This knowledge is critically important on passenger vessels, where a large number of people are reliant on the crew to keep them safe from harm.

The location of remote emergency shutdowns to the engine room—quickclosing valves for fuel and lube oil systems, remote stops for ventilation fans, and engine stops—as well as fire pump start controls may not be accessible during a fire.

Therefore, during fire-response planning, alternative remote emergency shutdown locations, such as the wheelhouse, should be considered for redundancy.

Remote shutdowns and quick-closing valves should be tested regularly to ensure proper operation. Under no circumstances should they be blocked open or otherwise rendered inoperable.

Icing can dangerously degrade a vessel’s stability. During freezing spray conditions, consider decreasing the amount of gear above the main deck, covering deck loads with tarps to shed water, lessening exposure to high winds and seas, developing de-icing procedures, and outfitting the vessel with de-icing equipment.

Mariners should have an understanding of their vessel’s stability information and the impact of added weight from icing.

Maintenance issues and other conditions affecting the safe operation of a vessel should be promptly and clearly reported, both internally to the master and critical watchstanders, as well as externally to the operating company.

Crew members should ensure that the master is fully advised on the operational or safety impact of a casualty. Reporting systems should provide specific guidance regarding critical equipment, hull integrity, and operational safety.

A robust reporting system should also include procedures for company oversight to ensure that crews are reporting issues and that the operating company is tracking and promptly addressing them.

Mariners should conduct testing per the manufacturer’s recommended schedule, ensure levels of treatment are correct, and maintain water quality within specified limits.

Insufficient cooling water maintenance may result in increased corrosion, clogging of cooling water passages, or, ultimately, the failure of equipment.

Failure to tighten fasteners on diesel engines to the manufacturer’s recommended torque settings was the cause of numerous accidents the NTSB has investigated over the past several years. Undertorqueing a fastener may cause excess vibration or allow the fastener to come loose, while overtorqueing may lead to failure of the fastener or the machinery component being secured. When installing fasteners, mariners should use a calibrated torque wrench and follow the manufacturer’s recommended tightening guide and torque values.

Even with modern mooring equipment such as synthetic lines and self-tensioning winches, strong winds can overpower standard pier mooring arrangements, particularly for vessels with a large sail area.

When high winds are forecasted, mariners should take precautions such as increasing the number of lines and mooring points, dropping the anchor, or ordering tugboat support.

If the mooring arrangements at the pier are inadequate, the master may consider moving the vessel to another pier or an anchorage until winds subside.

Mariners using electronic chart systems (ECSs) should be aware that aids to navigation, hazards, and other map features may not be represented on the displays at certain range scales.

One of the initial actions in combating a fire on board a vessel is to stop fans and close off ventilation to the affected space. These actions increase the effectiveness of firefighting agents while preventing fresh air from supplying the fire.

Ventilation shutdown is particularly important in engineering spaces, where a ready supply of fuel makes firefighting difficult if the flames are not extinguished quickly.

Vessels that have fixed-open ventilation accesses give the crew limited ability to control and extinguish a fire, even with installed firefighting systems.

Naval architects are encouraged to include engine room ventilation fan shutdowns and vent closures on all vessel designs, and operators should review ventilation system shutdown procedures on exisiting vessels

Shearing of the propeller shaft can be a catastrophic casualty to a vessel. If the sheared shaft backs out of the stern tube, the resulting opening may allow water ingress that exceeds the vessel’s bilge pumping capacity.

Vessel owners and operators should be aware of the limitations of visual inspections in determining the condition of shafting and should consider the use of periodic non-destructive testing as a tool to identify metal fatigue.

Fishing vessel operators are reminded to avoid unloading large catches that exceed the pen height and can result in spillover and cargo on deck. Catch sliding around on deck has an adverse effect on vessel stability. Additionally, freeing ports (scuppers) in the bulwarks should be kept clear for rapid draining of water on deck. A deck filled with water creates an undesirable free-surface effect. The weight of the additional water also increases the height of the vessel’s center of gravity and decreases its freeboard, consequently reducing overall stability

Vessel owners, operators, and crewmembers should be aware of the limitations of VHF radio reception in the Aleutian region and other remote areas.

In addition to VHF radios, mariners should have alternate means of immediately alerting Coast Guard search and rescue centers, such as satellite phones, other satellite communication devices, or marine medium-frequency (MF)/high-frequency (HF) radios.

Captains and vessel owners should ensure that crewmembers are knowledgeable and proficient in the use of the designated alternate communication devices, and contact information for the SAR center should be posted in the wheelhouse and in crew common areas.

In the case of satellite communication devices with SOS functionality, designated emergency contacts ashore should know critical information such as the vessel’s intended route, the vessel’s operations, and the number of persons on board. 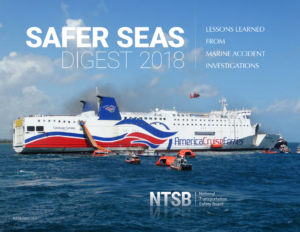