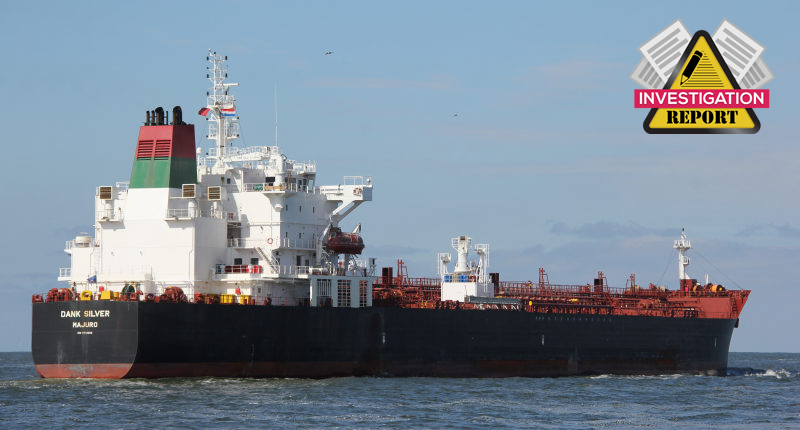 NTSB issued an investigation report on the contact of the bulk carrier Dank Silver with a fender of the Sunshine Bridge in the Lower Mississippi River, in June 2019. The investigation identified the pilot’s decision to turn the vessel off the dock, instead of going upriver, as key cause of the accident.

On 16 June 2019, about 1322 local time, the bulk liquid cargo vessel Dank Silver was transiting downbound on the Mississippi River, near Donaldsonville, Louisiana, when it struck the fender of the western pier to the main (channel) span of the Sunshine Bridge.

There was no pollution or injuries to the 19 crew members onboard the Dank Silver.

Damage to the vessel was about $1.05 million, and damage to the bridge was at $3.5 million.

The probable cause of the tank vessel Dank Silver’s contact with the Sunshine Bridge was the pilot’s decision to turn the vessel off the dock instead of going upriver, to gain sufficient steerageway to maneuver downriver through the bridge.

The VDR recording of the master/pilot exchange did not include a discussion of the pilot’s plan for maneuvering through the bridge, and no subsequent discussion of the ship’s course. Clear communication is a characteristic of sound bridge resource management, but it is unlikely that input from the master or second mate after getting underway could have averted the contact, given the current and the vessel’s trajectory.

When the pilot ordered the rudder hard to port, thrust from the propeller was stopped, so the ship’s rudder had less effect on turning the ship. At this point, the tanker was essentially drifting in the strong current, as the ship’s speed through water was minimal or negative while its speed over the ground was substantially higher, which was setting it to the right of the pilot’s intended track.

It appeared that the pilot never gained control of the ship.

The ship’s ECDIS recordings show the tanker towards the right descending (west) bank, rather than the left descending (east) bank, where the bridge’s channel span was.

Given the negative or low speeds through the water, using greater propeller thrust earlier would have improved the ship’s response to rudder inputs.

The pilot knew before getting underway that he would get two-third power from the forward tug because of the reduced propulsion stipulation imposed by the strength of the ship’s bitts and chocks. Reduced power from the tug reduced the speed that the tanker could be turned, so the near-180° turn required to head downriver took longer to complete than if the pilot had used another tug in a different location to provide more force to turn the ship faster.

The pilot ceased to use the after tug while the tanker was still more than 30° from the heading the ship needed to safely pass beneath the bridge, and he also had the option to use another tug to slow the ship’s downriver headway as it was being turned.

Ultimately, because the pilot decided to turn the ship immediately off the dock rather than heading upriver to turn, he had less distance to gain control of the movement of the ship above the bridge. 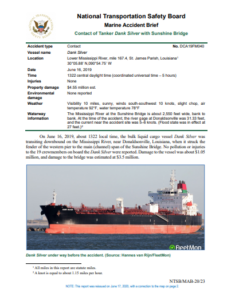