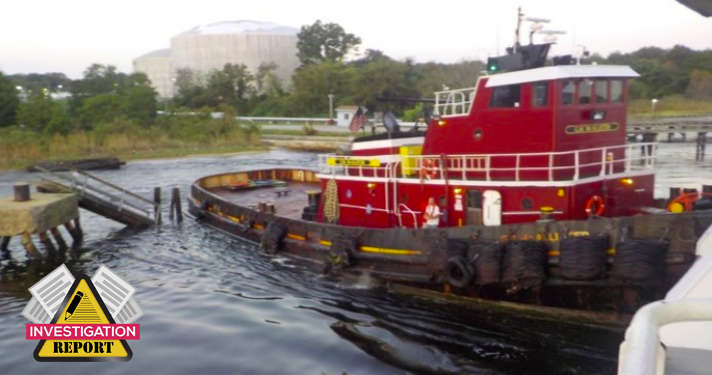 NTSB issued an investigation report on the contact of tugboat G.M. McAllister with NGL Energy Partners berth on Elizabeth River, while engaged in manoeuvring operations. The investigation revealed excessive speed and poor communication as main causes of the incident.

On 23 September 2019, about 0657 local time, the tugboats G.M. McAllister and Nancy McAllister were assisting the bulk carrier Ijssel Confidence on the Southern Branch of the Elizabeth River, in Chesapeake, Virginia.

While engaged in turning the bulk carrier, the G.M. McAllister, with for crew members onboard, contacted the NGL Energy Partners wharf.

The vessel was not damaged and therefore continued the turning maneuver.

There were neither pollution nor injuries as a result, but damage to the wharf was estimated at $1.47 million.

The National Transportation Safety Board determines that the probable cause of the contact of the G.M McAllister with the NGL Energy Partners berth was the docking pilot backing down the river toward the turning basin at a speed at which the assist tugboats could not be effectively used.

Contributing to the accident was insufficient communication, before and during the maneuver, between the docking pilot and the G.M. McAllister captain.

The investigation also ruled out fatigue, drug impairment or improper credentials as possible causes of the accident.

In addition, the report highlights that, compared to the nine recent undockings from the same dock, the Ijssel Confidence’s speed exceeded the average speed of the other ships by over a knot. Both tugboat captains stated that the Ijssel Confidence was moving too fast for the tugboats to work effectively.

The G.M. McAllister captain and the docking pilot told investigators that there had been gaps in their communication; had they both communicated better, and had the ship proceeded in a speed more appropriate for the tugboats, this accident could have been avoided,