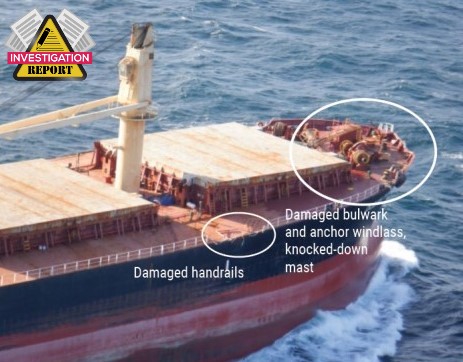 NTSB published its investigation report on the bulk carrier Ocean Princess, which, with a crew of 24, struck the uncrewed/out-of-service oil and gas production platform SP-83A while operating in the Gulf of Mexico, 24 miles south of Pilottown, Louisiana.

On December 28, 2020, the Ocean Princess arrived at the Harmony Street Wharf in New Orleans, Louisiana, with a cargo of steel and magnesium ore. According to the master, the plan was to discharge cargo for several days and then transit to the Gulf of Mexico, drift overnight, and return to New Orleans to load a cargo of grain. While drifting overnight, crewmembers would clean the cargo holds to prepare for the grain.

On January 6, 2021, after completing cargo discharge, the Ocean Princess got under way at 0722 with a pilot from the Crescent River Port Pilots’ Association at the conn (operational control of the vessel). After about a 6-hour transit downriver, an Associated Branch pilot boarded the vessel and assumed the conn from the Crescent River Pilot, who then departed the vessel via pilot launch. At 1506 the Associated Branch pilot departed the vessel at the pilot station, and the master assumed the conn as he directed the vessel during its transit to an area where the vessel would drift overnight, arriving about 1630. The engine was stopped, the master turned over the conn to the mate on watch (the chief officer), the engineering watch was instructed to have the engine ready for maneuvering within 15 minutes, and the master then left the bridge to rest.

The area where the vessel drifted bordered safety fairways to the north and west. There were three platforms in the drift area: two about 11 miles east-southeast of the intersection of the safety fairways, and SP-83A to the north. According to the master’s written night orders, the plan was to drift throughout the night with the engine on 15-minute standby, keeping clear of traffic and platforms. The night orders directed that, when approaching traffic or platforms, the mate on watch should call the engine room to make the engine ready to answer all bells and maneuver the vessel as necessary to avoid them. The crew had stopped cleaning cargo holds about 2000, and they would resume cleaning in the morning, then return to New Orleans as planned to load grain.

To give the crewmembers rest time after cleaning cargo holds during the day, the master scheduled himself to be on the bridge with the mate on watch, supplementing the watch and the duties of the lookout, from 2000 January 6 to 0400 January 7. The vessel had been drifting to the northwest since 1630 when, about 2108, the mate on watch called the engine room to ready the engine. Shortly thereafter (it took about 7 minutes to prepare the engine room) the vessel motored away from the western fairway with the master at the conn. At 2212, the engine was stopped, and the vessel again began to drift. According to the master, visibility was variable (2-3 miles in heavy rain and 5-6 miles in light rain).

At 2355, the second officer relieved the third officer as the mate on watch, with the vessel drifting to the north in alternating heavy and light rain showers. The master and the second officer used the S-band/10-cm radar and the electronic chart display and information system (ECDIS) for contact detection. The X-band/3-cm radar was energized but in standby mode. The second officer said he was focused on short-range contacts and may have reduced the radar’s range from the 3-mile range to the 1.5-mile range.

At 0121, the engine was increased to half ahead. At 0121:25, the S-VDR captured the master stating, “It’s getting closer.” The master later told investigators that when he saw multiple flashing lights, he realized there was something close to the vessel off the bow. The master ran out to the starboard bridgewing. At 0122:00, the master ordered the rudder hard to starboard and the engine full ahead. At 0122:10, the Ocean Princess’s starboard bow struck platform SP-83A at 4 knots speed over ground. The S-VDR captured the master saying, “Had a collision” at 0122:23.

The master ordered the rudder midships, stopped the engine, and sounded the emergency alarm. He told the chief officer via handheld radio to go to the bow and sound the tanks for flooding. After energizing a floodlight and pointing it forward, at 0127, the crew identified the object struck by the Ocean Princess as a platform (SP-83A). From 0128 to 0232, using various rudder orders and speeds, the master tried to steer away from SP-83A, but the vessel instead swung around the platform.

The STCW Code requires watchstanders to receive a minimum of 10 hours of rest in any 24-period and that “hours of rest may be divided into no more than two periods, one of which shall be at least 6 hours in length.” Investigators found that the second officer met STCW work-rest requirements during the period before the casualty. During the 24-hour period (0001 to 2359) on January 6, the master had 13.5 hours of work and 10.5 hours of rest. The master reported working on January 6 from 0600–1600 with a 30-minute break from 1200–1230. He was conning the vessel at 1600. After being relieved about 1630 when the vessel began drifting, he had a rest period of about 3.5 hours before assuming the watch from 2000 until the time of contact. It is likely that the master received less than 3.5 hours of sleep in the nearly 20 hours on board the Ocean Princess before the contact. The extended work hours and shortened off-watch hours from covering the lookout watch at 2000 put the master outside of the STCW work/rest limitations and left him susceptible to the effects of acute fatigue. Impacts of fatigue include difficulty concentrating, decreased ability to multi-task, increased risk tolerance, and reduced vigilance.3 The effects of fatigue likely impacted the master’s performance in simultaneous roles as master and lookout, affecting his judgment and situational awareness in the events before the contact.

In addition to watchstanding duties, the master was performing other tasks while on the bridge. Before the casualty, the master was recorded on the S-VDR spending 40 minutes reviewing stability calculations for the loading plan with the mate on watch (second officer) and then the chief officer before making a phone call to the company office. Next, from about 0055 until 0120, about a minute before the casualty, the master engaged in a mostly one-sided conversation about non-navigational, non-pertinent matters with the second officer. Competing tasks, such as critical stability calculations, and personal conversations in the period leading to the contact likely distracted both the master and the second officer from their primary navigation duties. Distraction can reduce operator vigilance and negatively affect situational awareness.

Platform SP-83A was not charted on the official US electronic or paper navigation charts that provided the chart data to the ECDIS aboard the Ocean Princess, but the platform did appear on the British Admiralty paper chart that the mate on watch was using at the time of the casualty. The platform had been added to the US paper charts when installed in 1990, but for an unknown reason was omitted 20 years later in 2010 and remained off the two larger-scale US paper charts (charts 11361 and 11366) and ENCs for over 11 years—until after the casualty. Following the casualty, NOAA updated and corrected electronic and paper charts that had been erroneously missing platform SP-83A. Because ENCs have been stored in the NIS chart database since 2017 and the normal procedure for updating ENCs changed, NOAA believes the type of error that omitted SP-83A from the charts could not happen today

Effective bridge resource management principles ensure the appropriate allocation and prioritization of tasks, use of available resources, effective communication among watchstanders, team collaboration, and maintenance of situational awareness. Despite the missing platform SP-83A on the ECDIS, the necessary information, equipment, charts, and personnel were available on board the Ocean Princess to safely operate the vessel. However, these resources were not used effectively.

#6 Use of Available Resources

When making assessments or predictions about a situation, there can be a tendency to rely more heavily on information that reinforces one’s expectations and discount or avoid information that may contradict those expectations. In this case, both the master and the second officer told investigators that they saw the lights of the platform they eventually struck but were under a belief, or bias, that SP-83A was farther away because it did not appear on the radar or the ECDIS. Operating under this belief, the bridge team did not seek out information through alternative navigation resources to either confirm or deny their bias. Furthermore, despite identifying SP-83A on the paper chart, the mate on watch discounted this information and did not communicate it with the master. This concept is called confirmation bias. When the bridge team saw multiple lights 1 minute before the casualty, they realized a contact was close to the vessel. They did not identify that the object they struck was a stationary platform until a few minutes after contact.

#1 Probable Cause: The National Transportation Safety Board determines that the probable cause of the contact of the dry bulk carrier Ocean Princess with the oil and gas production platform SP-83A was poor bridge resource management, which resulted in the bridge team not identifying the platform and recognizing the risk it posed to their safe navigation even though they saw its lights about 10 minutes before the casualty.

Contributing was platform SP-83A not being shown on the vessel’s electronic chart display and information system due to a charting error.

The effective use of all available resources by a bridge team, including paper charts, electronic charts, and radars, increases collective situational awareness and contributes to a safe navigation watch. When identifying hazards, bridge teams should avoid overreliance on a single data source by cross-checking information with available bridge resources and communicating identified risks with fellow watchstanders to ensure a shared mental model.

Increasing operator vigilance and combatting overreliance requires healthy skepticism about situations and information sources regardless of how accurate they could be, or how confident one is in their own assessment. In this casualty, the electronic chart display and information system (ECDIS) was missing the oil platform struck by the vessel due to a charting error.

The vessel’s safety management system noted, “ECDIS is a valuable asset in assisting navigators and allowing them more time to maintain a proper lookout by providing them with more detailed situational awareness.”

However, it also warned, “navigators should always cross check ECDIS information with the other sources,” and, if not used properly, “ECDIS may contribute to accidents rather than preventing them.” The inability to recognize the fallibility of technology, such as an ECDIS, can result in operator overreliance and overconfidence that degrades sound navigation practices and negatively affects situational awareness.