NTSB issued an investigation report on the overpressurization and rupture of a cargo tank on the cargo ship 'Fairchem Filly' while at Houston Ship Channel, in May 2019. Investigators stressed that the vessel and terminal personnel involved were not following procedures related to cargo discharge and nitrogen-blanketing operations.

On 30 May 2019, about 0750 local time, the Marshall Islands-flagged chemical tanker Fairchem Filly, with a crew of 22, experienced an overpressurization of the number 3 port and starboard cargo tanks while discharging liquid hexene at Vopak Terminal in Deer Park, Texas.

The overpressurization resulted in damage to the number 3 port cargo tank and the tank top (deck).

All cargo was contained on board the double-hulled vessel, with no pollution or injuries reported.

The National Transportation Safety Board determines that the probable cause of the overpressurization and rupture of the 3P cargo tank aboard the Fairchem Filly during offloading was the vessel and terminal personnel involved not following policies and procedures related to cargo discharge and nitrogen-blanketing operations.

Contributing to the casualty was the lack of effective communication between the vessel and terminal personnel and the decision of the vessel’s PIC to continue discharge operations after being unable to communicate with the terminal.

Relief valves are fitted to cargo tanks to protect the tanks from an overpressurization event. The ship’s PV valves were overhauled and pressure-tested in April 2019 and had been inspected 10 days prior to the accident, with no deficiencies noted. Therefore, it is likely that the PV valves performed as designed. The terminal had no recent history of terminal equipment failure.

Relief valves have a maximum flow rate that cannot be exceeded, or the pressure will rise in the tank(s) that the valves protect. The terminal’s Nitrogen Supply Acknowledgement form indicated that the terminal could move 250,000 ft3 per hour through the hose for a purge, and their liquid cargo work instruction stated that a 2-inch hose must be used for blanketing.

However, a 4- inch hose was used for the nitrogen blanket supply during the liquid hexene cargo transfer. Since the nitrogen pressure at the dock would not change whether completing a purge or a blanket operation, the use of a larger 4-inch hose on the morning of the accident would have likely allowed for a flow rate near the purge maximum.

The ship’s cargo tank relief valves had a capacity of 17,057 ft3 per hour, as indicated on the cargo control room placard on board the vessel.

Therefore, this arrangement allowed for a potential nitrogen flow rate well in excess of the maximum capacity of the cargo tank relief valves. Without accurate and ongoing throttling of the nitrogen control valves, the risk of overpressurization was constant.

When a low-pressure alarm was activated on the vessel’s hexene tanks, the chief mate repeatedly attempted to contact terminal personnel via a handheld radio to request nitrogen, but the Vopak PIC (dockman) did not answer.

Since the chief officer could not contact the Vopak PIC, he ordered the ship’s pumpman to open the ship’s nitrogen supply valve all the way, after which the pressure in the tank should have risen, but it did not.

At this point, instead of securing the vessel’s nitrogen valve and stopping the operation until communications could be restored, the chief officer had the pumpman fully open the nitrogen valve, effectively removing all shipboard throttling control of the nitrogen coming on board.

With the ship’s throttling ability removed, the combined effect of the nitrogen pressure at the dock, the amount that the terminal valve was open, and the larger 4-inch hose (without a flow-reducing orifice installed before the ship’s manifold) resulted in the rapid pressurization of the cargo tanks, exceeding the relief valve capacity and overpressurizing the tanks to 15.8 psi (109 kPa), as recorded on the cargo vapor pressuremonitoring system.

Since the nitrogen hose connection was improperly configured (without a 1- inch hose or orifice), the flow rate of nitrogen had to be controlled by the ship or terminal personnel by manually adjusting the dock or ship valve.

Therefore, communication between the ship and terminal personnel was critical.

On the morning of the accident, the vessel’s pumpman was directed to open the vessel’s nitrogen control valve wide before communication with the terminal was established and the dock’s valve position verified. Since the valves were opened too far, the nitrogen supply rate exceeded the tank relief capacity design limit.

Although both the terminal and operator of the vessel had procedures and control measures in place that clearly outlined a nitrogen blanketing operation, the procedures were not followed on the day of the accident.

The terminal’s crew had work instructions that required that a 2-inch nitrogen hose be used to transfer liquid cargo, and the ship’s QHSE manual required its crew to use a 1-inch hose or orifice.

However, on the day of the accident, a 4-inch nitrogen hose was connected to the vessel with no orifice, which removed engineered controls designed to limit the flow rate of nitrogen to the cargo tanks safely below their relief capacity.

Additionally, the ship’s QHSE guidelines included a “Nitrogen Handling Checklist,” which outlined the flow rate and other information associated with a nitrogen operation, but the ship’s crew did not complete this checklist on the day of the accident.

Had the crew referenced this checklist, it is likely that they would have known that the potential flow rate of nitrogen would have exceeded the cargo tanks’ PV valve relief capacity, and they may have reassessed and corrected the configuration by using the correct hose size or a reducing orifice. 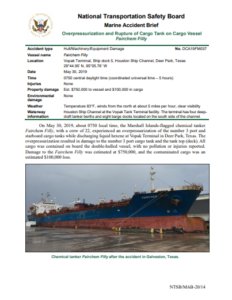