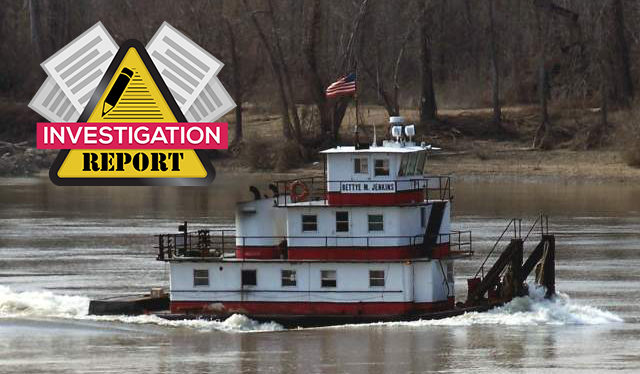 The US NTSB issued an investigation report on the contact of the towing vessel 'Bettye M. Jenkins' with Bunge Grain Facility on the Lower Mississippi River, in February 2019. The investigation identified the captain’s decision to pass ahead of an upbound tow while crossing a river in strong current as key cause of the accident.

While maneuvering across the river about 2 miles downriver of the Natchez Bridge, the lead barge, T9353, struck the Bunge grain facility pier and pilings. No pollution or injuries were reported.

Because the river’s current was unusually high at the time of the accident, both the Bettye M. Jenkins and the Clark Todd aimed for the west span of the Natchez Bridge, where the current was typically slower.

The Bettye M. Jenkins, which had stayed close to the left descending bank as it moved upriver, needed to cross the river to get to the west span.

The captain told investigators that he would normally start to cross when abeam the Adams County Port.

He could have avoided a difficult turn back upriver on the right descending bank had he crossed at a shallower angle in the high current instead of his normal track perpendicular to the river.

The Bettye M. Jenkins attempted to turn upriver after the Clark Todd passed ahead of it, but because they had to wait for the Clark Todd to clear ahead of them, they turned later than originally planned.

The captain of the Bettye M. Jenkins stated that along with the difficulty of turning the tow into the high current, his turn was slowed by the Clark Todd’s wheelwash.

The late turn left the tow too close to the Bunge facility, which the lead barge contacted, parting the tow’s lines.

Although the Bettye M. Jenkins was equipped with steel wire and ratchets for securing tows, the captain stated that he thought the polypropylene lines would be strong enough to secure the tow given the short passage.

According to operating company, the mooring arrangement would have sufficed for normal fleeting operations but was inadequate for this job in the high current; instead, the tow should have been secured using the steel wire and ratchets onboard.

NTSB determines that the probable cause of the contact of the Bettye M. Jenkins tow with the Bunge grain facility was the captain’s decision to attempt to pass ahead of an upbound tow while crossing a river in strong current during high-water conditions.

Mariners should thoroughly assess the impact of high current on all aspects of operations, including securing barges, passage planning, and boat handling. 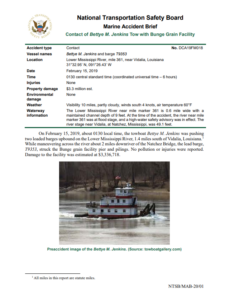