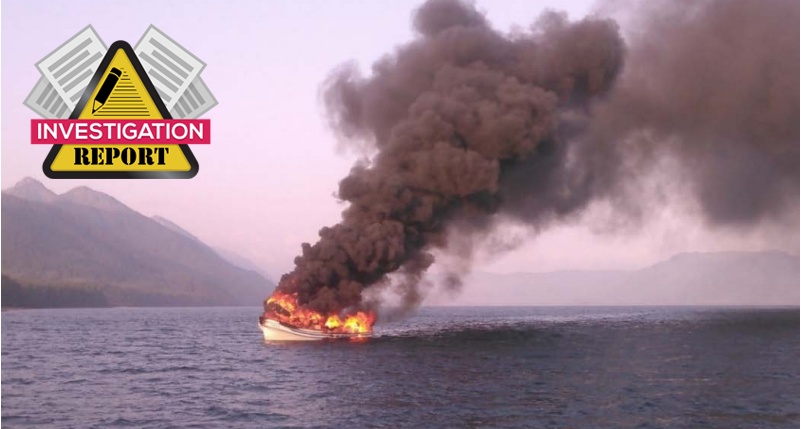 NTSB issued an investigation report on the fire onboard and subsequent sinking of the fishing vessel Ariel, while in Sheep Bay, Alaska, in August 2019. The investigation identified ignition of fuel leaking from the generator fuel supply line as key cause of the fire.

On August 26, 2019, about 1830 local time, the fishing vessel Ariel was transiting Sheep Bay, Prince William Sound, Alaska, when a fire broke out in the vessel’s engine room.

The four crewmembers aboard the Ariel attempted to fight the fire, but they were unsuccessful and abandoned ship into the vessel’s skiff.

The Ariel continued to burn and subsequently sank. Good Samaritan vessels rescued the crew, who returned to port uninjured.

About 500 gallons of diesel fuel was aboard the vessel when it sank.

The National Transportation Safety Board determines that the probable cause of the fire aboard the fishing vessel Ariel was the ignition of fuel leaking from the generator fuel supply line in the engine room.

Contributing to the severity of the fire and the eventual loss of the vessel were the fixed-open inlets for the engine room ventilation, which allowed fire-extinguishing agent to escape and air to enter the space.

The Ariel was not salvaged, thus investigators could not inspect the machinery or hull to determine an exact cause of the fire.

However, the engineer stated that when he first opened the engine room hatch to investigate smoke, he saw flames in the vicinity of the generator located on the port side aft in the engine room.

The long delay in the heat-sensor activation of the Halon fixed fire-extinguishing system, located on the forward bulkhead of the space, further indicates that the fire started aft in the space.

Thus, it is unlikely that the hydraulic systems for steering, throttle control, and deck machinery—whose main components were located forward in the space near the Halon system—were the source of the fire.

(Investigators could not determine why the captain could not reduce the main propulsion engine speed prior to shutting the engine down, but based on the information above, it is unlikely that this was causal to the fire.)

The fluctuating rpm of the diesel engine generator observed by the captain just after the fire was discovered was likely the result of fuel starvation, which suggests that the fuel line to the generator’s engine was breached.

The fuel hoses that ran between the manifold, fuel filter, and generator met Coast Guard material specifications; however, over time a hose could have become worn from contact, its connections could have loosened through vibration, or it could have otherwise failed, allowing fuel to leak into the engine room.

Leaking fuel or fuel vapor may have then come into contact with a hot surface, igniting the fire.

The vessel was fitted with manually operated fuel oil shut-offs in the lazarette and engine room; there were no remote emergency shut-offs. The crew was not able to close the manual shutoff valves before abandoning the vessel.

Although not causal to the initial fire, the remaining fuel in the tanks would have continued to feed the fire once the hoses melted. Based on crewmember accounts, the Halon fixed fire-extinguishing system on the Ariel activated and appeared to reduce the fire, but the fire rekindled and eventually consumed the vessel.

To work effectively, fixed fire-extinguishing systems require a minimum concentration of firefighting agent to either halt the chemical reaction producing the fire, displace oxygen feeding the fire, or effect a combination of both.

The fixed-open louvers on the inlets to the Ariel’s engine room ventilation ducts prevented the space from being sealed off, and thus the discharged Halon was allowed to escape, and new air was introduced to the fire.

The engineer’s attempt to seal off the ventilation inlet louvers using available materials was commendable but likely too late to prevent the spread of the fire.

Fixed fire-extinguishing systems in engineering and other hazardous spaces require a minimum concentration of extinguishing agent to either halt the chemical reaction producing the fire, displace the oxygen feeding the fire, or effect a combination of both.

To ensure the effectiveness of the system and prevent the reintroduction of oxygen to the space, ventilation inlets should be designed or modified to be closed remotely or covered. 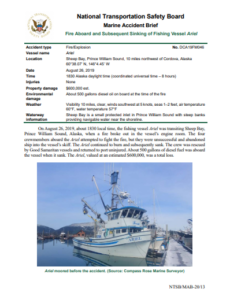